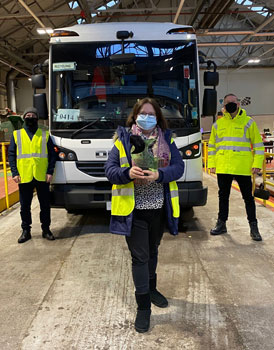 A TAMESIDE campaign that reduced blue bin contamination by 92% has won a national recycling award.

The Sort it Out campaign, jointly launched by Tameside Council and Recycle for Greater Manchester in February, is saving approximately £14,500 per month, helping to safeguard limited funds for priority services.

The success of the campaign was recognised in the Local Authority Recycling Advisory Committee annual awards, winning the ‘Best Campaign Communications of the Year’ category out of 50 entries.

From April to October, 2020, more than 340 lorry-loads of paper and card recycling from Tameside were rejected as they were contaminated with other waste such as nappies, plastic bags, polystyrene and even food. This added up to more than 1,600 tonnes and cost around £142,000 in landfill charges.

However, in the first month of the campaign in February 2021, only three lorry-loads were turned down. That is a 92% improvement on the normal monthly average of 38 and represents a possible annual saving of almost £175,000.

AwardThe Sort it Out campaign continues to have a significant impact, with very few lorry loads now turned down because of contamination – in fact a load has not been rejected since July 2021.

Cllr Allison Gwynne, Tameside Council’s executive member with responsibility for waste and recycling, said: “I want to say a huge thank you to all of our residents for responding so positively to the campaign and sorting out their blue bin recycling correctly. This is saving significant amounts of public money that can now go towards vital frontline services.

“This has been a truly exceptional joint effort of the community, the council and Recycle for Greater Manchester working together to make a real and positive difference and I’m delighted it has received this national recognition. I want to urge everyone to keep up the good work so that we can all keep seeing the financial and environmental benefit