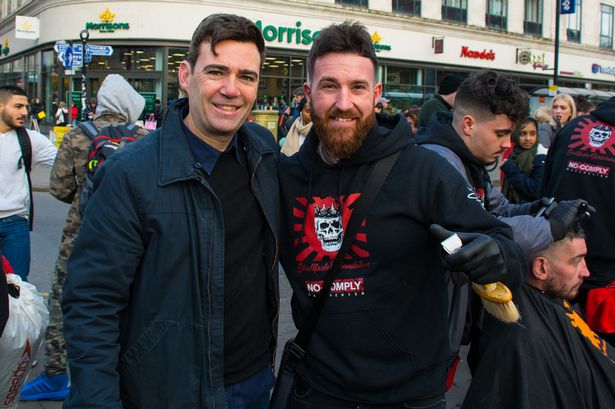 A sleepout will be held this weekend in a bid to raise funds for Manchester’s homeless community.

The Skullfades Foundation is hosting its inaugural ‘Sale Sleepout’ at The Square Shopping Centre on Saturday, October 5.

Funds raised during the sleepout will go to Ged King’s Skullfades Foundation and be used to train homeless people in barbering and business skills.

Ged King, founder of the Skullfades Foundation and Skullfades Barbershop in Stretford Mall, will host the sleepout and deliver a talk to participants, along with fellow TEDx speaker Ben Allsop.

During the evening – expected to be attended by 100 people – there will also be a variety of local talent performing live to keep participants entertained, including Prose and Tom Walker.

Ged is urging people to get involved for just a £5 entry fee and said the sleepout comes after The Office for National Statistics this week estimated that 726 homeless people died in England and Wales last year, more than a fifth higher than the previous year.

Ged said: “The Sale Sleepout will definitely be one to remember. All we are asking of those who attend, is to bring a sleeping bag and a picnic.

“The primary purpose of the event on Saturday is to raise money – however, we also want to help raise awareness of the ongoing problem and remind homeless people that they are not alone and that we are here to help.”

Ged, who has worked with Greater Manchester Mayor Andy Burnham on his ‘A Bed Every Night’ homeless scheme, added: “We are very excited to be a part of something special and to ultimately do our bit to fight homelessness in the city.

“It is our mission to support disadvantaged individuals who find themselves on the street, regardless of their circumstances. That’s why we’re trying to encourage as many people as possible to get involved to help us raise money for such an incredible cause.

“We want to continue our work with the homeless community in Manchester and help put an end to rough sleeping for good.”

The Skullfades Foundation was created in order to help disadvantaged people in the homeless and ex-service personnel community, providing haircuts initially and then training them in barbering skills to increase their chances of securing employment.

To purchase your tickets for The Sale Sleepout visit: https://www.eventbrite.co.uk/e/sale-sleepout-with-skullfades-foundation-to-help-homeless-people-tickets-70938387627