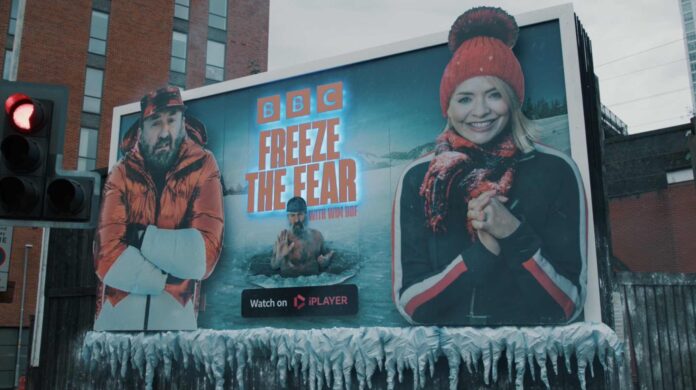 To celebrate the premiere of  new  series ‘Freeze the Fear with Wim Hof’, BBC Creative, the broadcaster’s in-house creative agency,  have created a billboard with a frosty effect.

The six-part series, coming to BBC One and BBC iPlayer on 12th April, is hosted by Holly Willoughby and Lee Mack and sees eight celebrities embarking on a once-in-a-lifetime epic adventure, under the training of extreme athlete Wim Hof aka ‘The Iceman.’

The billboard, which is on display on Chapel Street in Salford features a shivering Holly and Lee, whilst extreme athlete Wim Hof remains cool as he takes a dip in freezing water. The shivering comes from a custom-made motor, gently moving the cut outs as if shaking from the cold.

The billboard is completed with icicles made out of foam material attached to the bottom of the frame, and with sounds effects playing the sounds of blowing wind, amplifying the cold atmosphere of the display.

BBC Creative Director, Ali Dickinson, said, “Working on Freeze the Fear with Wim Hof has been fantastic. On what other project could you create a shivering billboard, complete with snow machines, icicles and giant versions of Lee Mack and Holly Willoughby shaking on the streets of Salford?”

Senior Head of BBC Marketing, BBC One, Faye Jones, added, “Spring is in the air, but not for the eight brave celebrities who stepped out of their comfort zones and into the world of the Ice Man. Our ad gives passers-by a sense of the freezing challenges they encountered. We hope it’ll put a smile on people’s faces, in the same way this brilliant new series will.”

Freeze the Fear with Wim Hof is a Hungry Bear Media production for the BBC, commissioned by Kate Phillips, Director of Entertainment Commissioning. The Executive Producer is Dan Baldwin and the Commissioning Editor for the BBC is Kalpna Patel-Knight. The series format will be distributed by BBC Studios internationally.

‘Freeze the Fear with Wim Hof’ premiers on BBC one on 12th of April at 9PM.

Last chance to see-Exhibition that explores manipulation of the body to close at The...