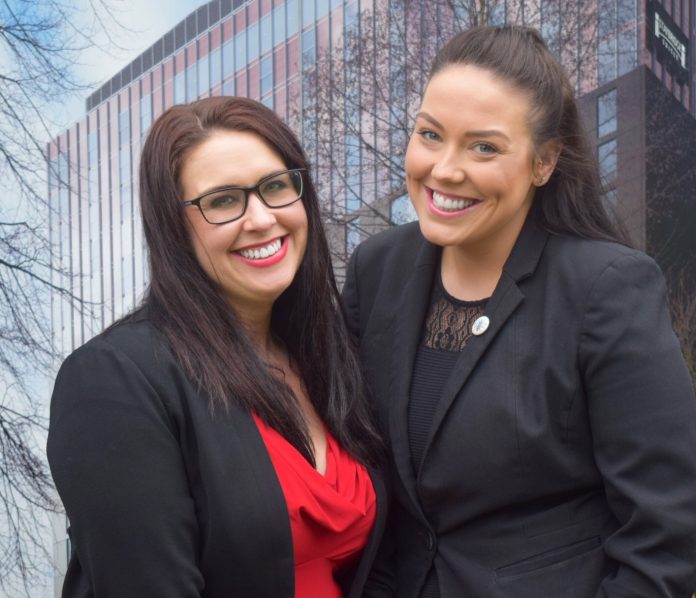 Experienced hoteliers Andrea Baron and Samantha Byrne have joined the first dual-branded hotel under one roof in the north of England.

Boasting 328-rooms the dual-branded Crowne Plaza and Staybridge Suites – known as a ‘double pack’ concept – will open to the public early next year.

Andrea has become Sales Manager of the first Staybridge Suites to open in Manchester – after joining from The Lowry Hotel.

And Samantha has landed the Crowne Plaza Sales Manager role after leaving the Holiday Inn near Piccadilly train station.

Andrew Fletcher, General Manager of the dual-branded hotel, described Andrea and Samantha as crucial hires.
“Samantha was heavily involved in the opening of Holiday Inn and has worked at The Malmaison, Hilton Manchester Deansgate and the National Football Museum, while Andrea boasts experience in serviced apartments too, having been part of the SACO Piccadilly ApartHotel team,” said Andrew.

“We feel they are the perfect fit for each brand and are delighted that they have come on board during what is a truly exciting period as we continue to near our opening date.”

The dual-branded double pack concept isn’t something that has been offered to people staying in Manchester before.

While the Crowne Plaza will contain 212-rooms, a 120-cover upscale restaurant, seven meeting rooms catering for over 200 delegates and a gym. Staybridge will have 116-rooms directly above it and offer a warm, social and home-like environment through a mix of studio and one-bedroom suites.

The dual-branded hotel is located on The Oxford Road Corridor, an innovation district running south from Manchester city centre that is home to 70,000 students and a workforce of 60,000 people.

It sits opposite The Royal Northern College of Music hotel and forms part of the University of Manchester’s Campus Masterplan, which includes the wider redevelopment of Alliance Manchester Business School.Both brands are part of the IHG portfolio.

Staybridge Suites Sales Manager Andrea said: “The double pack concept is truly unique to Manchester and I’m already enjoying being part of a growing team.
“I have worked in sales for 16 years, have both hotel and extended stay experience which is quite unusual and have previously worked with my now Director of Sales and Marketing Melanie Thompson.”

She added: “There is so much opportunity to do new business on The Oxford Road Corridor and I believe we can carve a niche for ourselves and capitalise on the growth of the city and the Corridor.”

Samantha, Sales Manager Crowne Plaza, said: “Having opened the Holiday Inn in Manchester city centre not too long ago, another brand that is part of the IHG portfolio, I know just how brilliant it is to be heavily involved at this stage of the process.

“Crowne Plaza is my primary focus, but I’m also excited to work alongside Andrea and learn about the extended stay offering, market and industry.
“The next few months are going to be hard work but also enjoyable, ahead of opening early next year.”