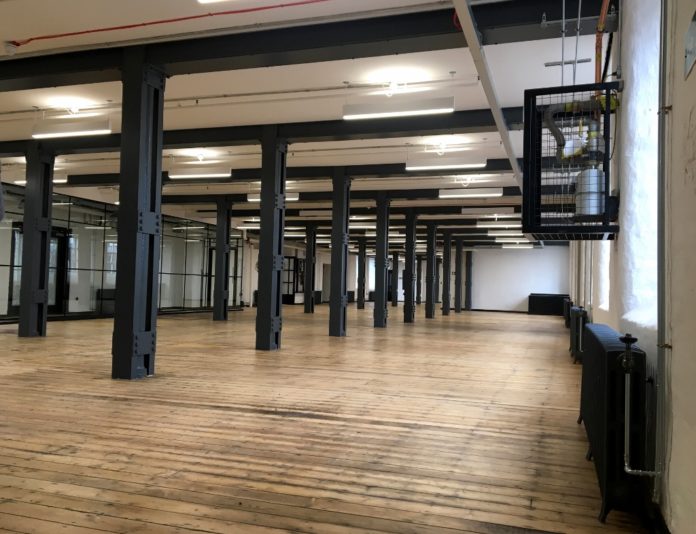 The second phase of a £1m refurbishment designed by architects Atelier MB has begun at a former cotton mill in Manchester.

The scheme at Grade II listed Chatham Mill on Chester Street will create a further 3,800sq ft of modern office space on the ground floor.

WilsonCooke, a brand, digital and marketing agency, took the space for its new studio, advised by Savills.

Andrew Burns, managing director of Atelier MB, said the second phase, involving the refurbishment of two adjacent buildings, would provide office accommodation for up to 40 people.

The first phase involved stripping out partitions and paring back other later aspects of the building fabric to expose original cast-iron columns and beams and original finishes to the walls, timber floors and ceilings.

Other interior works included the installation of new heating, lighting, electricity, a shower room and toilets, and glazed partitions to form an attractive corridor leading to the new office space.

Andrew said: “The entire project is designed to enable the new occupiers to really appreciate the building in its raw form, drawing on the energy and aesthetics of the historic mill, with a new entrance that gives a great sense of arrival at stimulating workspaces which are full of character.

“The second phase is a similar undertaking to the first, involving the refurbishment of the two buildings to the same standard and retaining original features.

“Once finished, the new offices will appeal to up-and-coming businesses in Manchester’s burgeoning creative, digital and media sector seeking to establish a base in a superb location.”

The project is due to be completed later this year. The letting agent is Edwards & Co.

Chatham Mill, was built in 1820 and the ground floor was previously used as a warehouse by an importer of fancy goods. The building is near the city centre and the University of Manchester.

4 Steps to Get a Job in Manchester

How To Recruit For Tech Companies