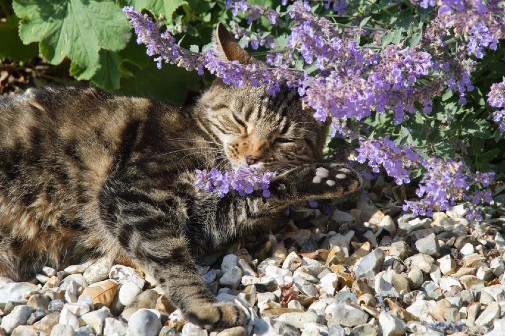 By unpicking its genetic makeup, researchers have discovered how catmint evolved to make nepetalactone, the molecule responsible for its effects on cats.

The research, conducted by a team of international scientists including academics from the University of York, also provides new information about how plants can produce complex molecules, which may be useful for making medicines.

Catmint, also known as catnip, is well known for its intoxicating effect on cats. The odour responsible for the cats’ strange behaviour is nepetalactone, a volatile iridoid produced by catmint. Iridoids are substances some plants use to defend themselves against herbivores or pathogens. Nepetalactone is probably made by catmint to repel insects but, by coincidence, it also triggers ecstatic behaviour in cats.

The researchers sequenced the genome of catmint to understand how it makes nepetalactone and how it evolved to make this unique molecule.

The first author of the article, Dr Benjamin Lichman from the Centre for Novel Agricultural Products in the Department of Biology at the University of York, said: “We discovered a suite of unusual enzymes which generate nepetalactone. These enzymes are not found in any related plant species and have evolved uniquely in catmint.

“When we first saw the genome sequence of catmint we realized that the important genes that we hypothesized were active in the formation of nepetalactone were next to each other in the genome. This allowed us to solve the problem more easily.”

Understanding how plants make complex molecules like nepetalactone could also lead to the ability to create medicines, such as anti-cancer drugs derived from plants, more efficiently and quickly than scientists are currently able to harvest them from nature.

The research was led by Professor Sarah O’Connor, director of the Department of Natural Product Biosynthesis at the Max Planck Institute for Chemical Ecology in Germany.

Sarah O’Connor said: “Plants are constantly evolving new chemistry. With our research, we would like to get snapshots of this evolution in action.”

Study claims everyone alive today can trace our ancestry to a region in northern...