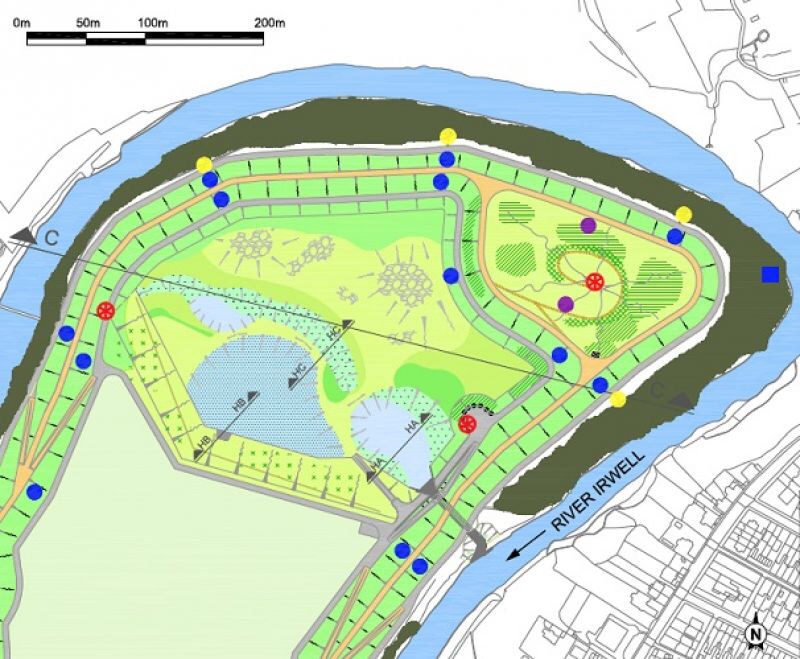 IT’S the size of 260 Olympic swimming pools, will have its own wetland and wildlife habitat, and will help protect hundreds of homes and businesses.
Salford’s new £9 million flood basin is now operational at Castle Irwell on the site of the old student village, beside the River Irwell.
Led by the Environment Agency, the new Castle Irwell basin is a joint project with Salford City Council, the University of Salford and the local community, and provides space to capture and hold flood water until river levels drop and can safely be released.

Today the project is up for an International Green Gown Award, having already won a UK award in the community section. It is also shortlisted in the Environment Agency’s Project Excellence Awards for ‘Working in Partnership’ Awards

Together with Littleton Road flood basin, it can hold 1,300 million litres of water, taking it in through an inlet weir once river levels reach a certain height.
Mark Garratt, Flood Risk Manager for the Environment Agency said: “All organisations involved have worked hard to come up with an innovative solution to flooding in the city and I am proud of the collaborative approach which has enabled this scheme to be constructed.
“Importantly the scheme offers additional flood protection to 1,900 homes and businesses in areas including Lower Kersal, Lower Broughton and Cheetham. It will also provide a boost to the City Council’s economic development plans to regenerate areas not previously viable, while creating a riverside environment which can be enjoyed by the local community.”