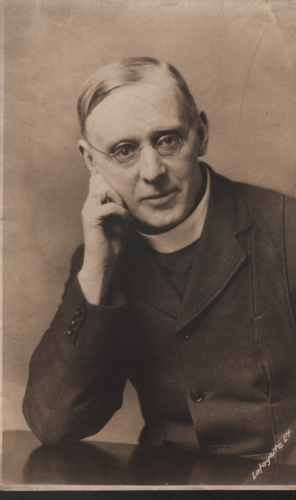 The legacy of one of Salford’s most revered sons will be immortalised in a new apartment block, which will bring more than 100 affordable homes to the city.

Housing association Salix Homes has announced its new high-rise development in Trinity will be named Artifex in a nod to Canon Peter Green, who was a rector at the nearby St Philips Church, as well as a published writer and pacifist who was passionate about fighting social injustice.

During the First World War and until the 1950s, Canon Peter Green wrote a weekly column in The Manchester Guardian – which was later to become The Guardian – under the pen name ‘Artifex’.

He wrote about pacifism and compassion as well as articles about social injustice and women’s suffrage and is fondly remembered as a ‘real man of the people who loved the Salford people’.

Sue Sutton, chief executive at Salix Homes, said: “The legacy of Peter Green is already recognised in Salford, with Canon Green Court being named in his honour back when it was built during the 1960s.

“We wanted to pay our own tribute to this much-respected Salford son whose fight against social injustice represents our own beliefs and values at Salix Homes and our ethos to deliver high-quality, affordable housing for everyone. This is even more pertinent in an area of Salford that has seen little to no new affordable housing for decades.

“The Artifex will bring 108 desperately-needed affordable homes for people in Salford, at a time of a housing crisis. Peter Green was incredibly progressive for his time and very vocal against social injustice. He was passionate in his calls to prioritise housing for all and much of what he said all those years ago, still resonates today, so we felt naming the tower block in his honour is a fitting tribute to his memory.”

Canon Peter Green was born in 1871 and served as the Rector at St Philips Church from 1911 – 1951, serving through two world wars in what was then a deprived dockyard community. He died in 1961.

He dedicated his life to supporting impoverished communities and used his platform as religious commentator at The Manchester Guardian to speak out against war, hate, injustice and racism. He also wrote 38 books and served as a Chaplain to the King.

During one column he penned in 1944 he spoke about the importance of prioritising housing as part of the Government’s post-war recovery and rebuilding plans.

In it he said: “What is the good of building magnificent schools in which children can spend five hours a day for five days a week if the rest of their time when awake has to be spent in the street because their houses are holes to sleep in not homes to live in.

“When the time comes for action, let stately civic centres and the repair of cathedrals and churches, and large hotels, and super cinemas, and everything else, give place in the competition for money, man-power and materials, to homes for the people.”

This year marks the bicentenary of The Guardian, and The John Rylands Library, which houses The Guardian archives, will be celebrating the 200th anniversary with a special exhibition.

Dr Janette Martin, modern history archivist (special collections) at John Rylands Library, which is part of The University of Manchester, said: “The University of Manchester Library Special Collections is proud to hold the archives of The Manchester Guardian. These include letters from the much-admired religious correspondent ‘Artifex’ – a well-known champion of social justice, compassion and decent housing.

“Canon Peter Green’s weekly column under the pseudonym Artifex ran from the First World War to the 1950s shedding light on some of the hardships faced by Salford people in the first half of the twentieth century.

“This year The Guardian celebrates its bicentenary, so the naming of the Artifex building by Salix Homes is a very fitting tribute to his memory during a very special anniversary year.”

The Canon Green Campus enjoys an incredibly rich history, and the new Artifex block is built on the site of the old Blackfriars Road Baths, which were demolished during the 1970s.

Ms Sutton added: “The site’s rich history means it’s played a central role in the lives of Salford people over the years and the next chapter for the site will deliver the largest affordable housing scheme in the area, so we’re proud to be building the much-needed homes that Salford desperately needs.”

Salix Homes contractors Willmott Dixon are currently onsite and the Artifex block is expected to be complete this Spring. Once complete, the block will comprise of 108 one and two-bedroom affordable apartments, which will be available under the Rent to Buy scheme for expressions of interest from March.

The new Artifex apartment block has been partially funded thanks to a £3.8million grant from Homes England.

Brassed Off at Oldham Coliseum