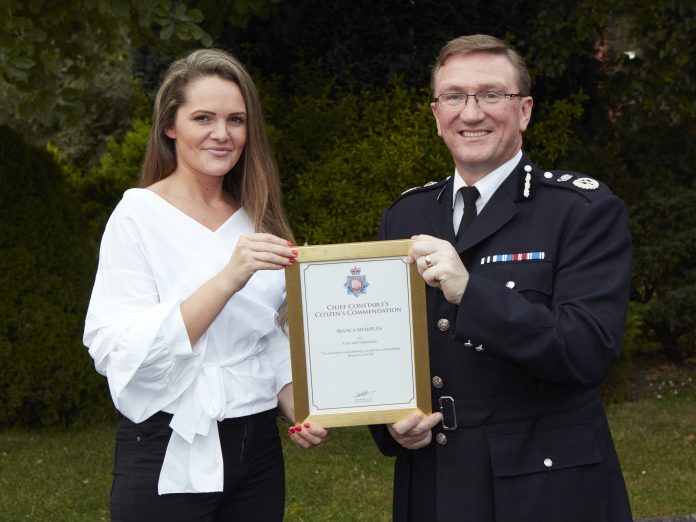 A good Samaritan, who stopped to talk to a distressed man, has been awarded by Greater Manchester Police for her brave and calm intervention.

In February this year, Bianca Sharples, 30, from Prestwich, was driving to work. At around 8am as she approached the Junction 19 bridge over the M62, Bianca noticed a young man climbing the railings. Feeling compelled to stop Bianca made her way back around the roundabout and parked nearby.

Cautiously approaching the young man on foot, she calmly asked if he was alright. It was obvious to Bianca that the man was distraught and showed clear signs that he had previously been crying for some time. The man replied that he had enough and didn’t want to carry on.

Bianca attempted to engage in small talk with the young man. Several times he returned to bridge footpath before again climbing the railings to lean over the edge of the busy M62 motorway below.

During this time, Bianca tried to wave down a number of passing vehicles using the junction during the morning rush hour. Unfortunately, in the space of half an hour, no one came to Bianca assistance.

As the man refused to come down from the railings, Bianca knew she would have to call the police herself. Not wanting to agitate the man any further, Bianca asked if he would like to sit her in car or go for a coffee and talk. Making her to way to her vehicle, Bianca called the police.

Within minutes two police were on the scene and calmly engaged with the man. Realising the officers were in control of the situation Bianca, although shaken, made her way to work. It was only when she arrived at her workplace that the enormity of what had just happened became clear.

A few days later Bianca received a call from one of the officers, letting her know that the 18 year-old man had at the time been placed under the Section 136 Mental Health Act but was now back with his family and receiving the proper medical care.

On hearing about her bravery award nomination, Bianca said: “I was overwhelmed when I heard that had been nominated for this award.

“At the time, I just felt something wasn’t right when I saw the man on the bridge, I just had a gut feeling that I had to stop and make sure he was alright.

“I was relieved to find out later that he was safe, back with his family and receiving the care he needed.”

Greater Manchester Police Chief Constable Ian Hopkins, who presented Bianca with her bravery award said: “Bianca showed great courage and compassion in helping a vulnerable young man in what must have been an emotionally difficult situation.

“Bianca must be commended for remaining calm throughout and for continuing to engage with man until officers arrived.

“I and the officers involved have no doubts that Bianca’s actions helped to save a life that day.”

Greater Manchester Police are asking people to surrender their firearms over a two-week long...