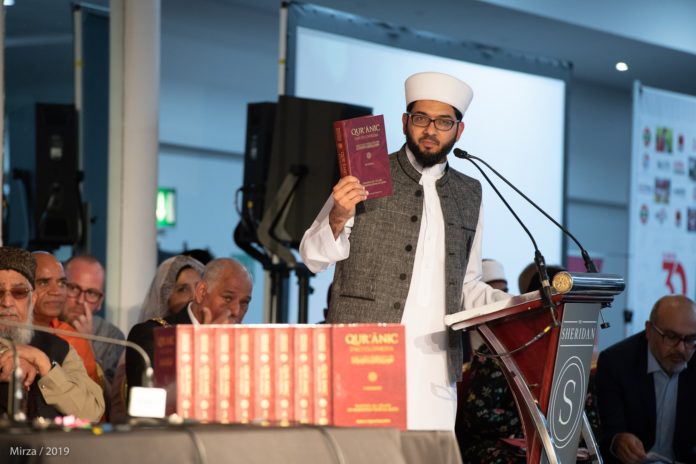 The Sheriden Suite in Manchester was packed to the rafters on Sunday for the launch of a Quranic encyclopaedia by the internationally renowned author and scholar Dr Muhammad Tahir-ul-Qadri.

The event was attended by over 200 British scholars and Imams and over 2000 British Muslims.

A variety of speakers addressed the event such as Dr Julian Hargreaves of the Woolf Institute.. The newly appointed special advisor to the government Imam Qari Asim MBE, Shadow Immigration Minister Afzal Khan MP and many others.

Imam Qari Asim MBE said “the Quranic Encyclopaedia is a remarkable piece of work and a study of the relevant sections makes it clear why Islam is known as a ‘religion of peace’.”

Afzal Khan MP said “he was very excited that the launch of this very important publication is taking place in his home city. He said it will help people to gain the true understanding of Islam.”

The nearly 2000 strong audience heard the author of the Quranic Encyclopaedia give a detailed lecture about it. He emphasised that the encyclopaedia will assist scholars, academics, students and the general public in gaining access to what the Quran says on a large variety of subjects, from the creation of Man, the composition of the universe and many other scientific subjects to morals, manners and day to day life.

He especially said that the encyclopaedia ensures that extremists cannot misuse verses of the Quran for their own ends.

“The launch of this Encyclopaedia in English will connect English speaking Muslims from the western world directly with the holy scripture and to the correct teachings of God Almighty. This will prevent hate preachers from being able to twist or use such scriptures out of context to brain wash young innocent minds towards radicalisation and extremism. Those verses are contextualised and expounded by including them under specific section headings which make clear what those verses really mean and why they were revealed.”