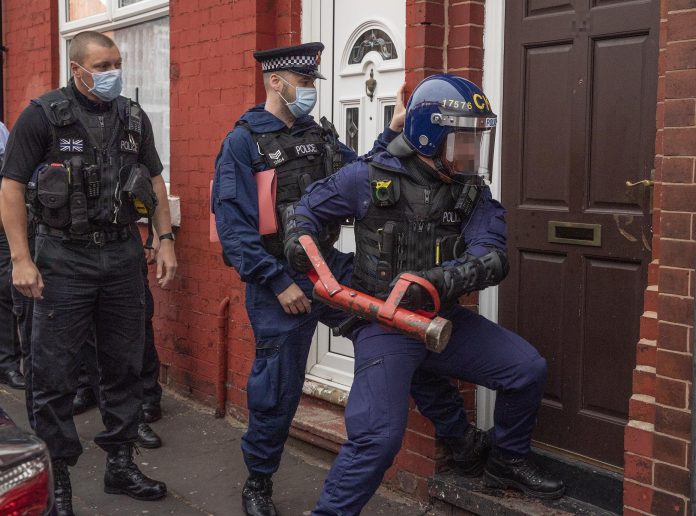 Police from the North Manchester division carried out raids at two addresses in Cheetham Hill as part of an ongoing investigation into gunshots that were fired in the area last week.

Police were called to reports of between two and four gunshot sounds on Galsworthy Avenue in the early hours of Monday 11th of May.

No injuries were reported but some damage was caused to a vehicle on the street.

Officers also seized a quantity of cash as part of the direct action.

An 18-year-old man was also arrested during the raids on suspicion of possession of Class A and Class B drugs with intent to supply. He remains in custody for questioning.

Speaking after the raids, Superintendent Rebecca Boyce, of GMPs North Manchester district, said: “First and foremost I sincerely hope that this morning’s activity shows to the people of Cheetham Hill just how seriously we continue to take incidents of this nature. We will explore every line of enquiry available to us and leave no stone unturned in our pursuit of justice.

“Guns and violence have no place on our streets; and anyone who is harbouring weapons of this nature or taking part in this kind of criminal activity should know that we do not take these incidents lightly. Anyone who brandishes a weapon within our communities and ultimately puts the lives of others at risk can expect to be investigated by us.

“As part of our ongoing commitment to protecting people and making the streets of Cheetham Hill a safer place, we have been working closely with partners, including Manchester City Council –both Adult and Children’s Services and housing providers. This prevention work is absolutely vital if we are to support those most vulnerable in our society and put a stop to this type of offending. A huge priority for us is discouraging people from taking this path and turning to this kind of criminality and I would like to take this opportunity to thank all of our partners who have continued to support us in this.

“We have been always very clear that we cannot do this alone and would like to continue to appeal to the public to help us. Often, answers lie within communities and this type of criminal activity can only be halted completely with the support of those with information. If people would prefer to speak anonymously, they can do so by contacting the independent  charity Crimestoppers.”

Man in critical condition after assault in Newton Heath