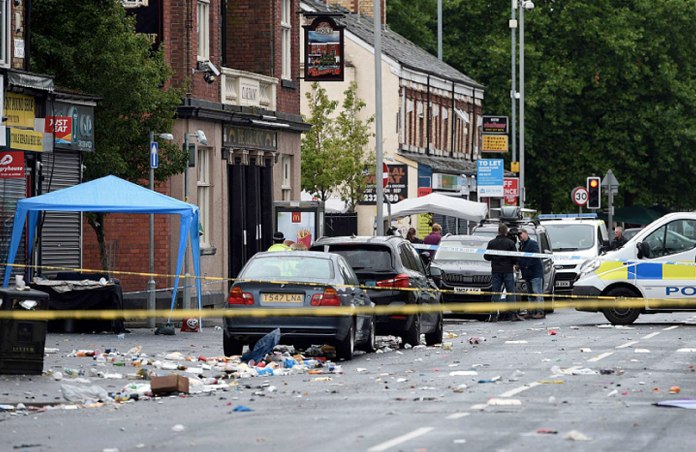 Police are appealing for members of the community to help find the person responsible for the shooting in Moss Side that happened over the weekend.

Twelve people in total were treated at hospital for their injuries, with nine of them now being discharged.

Two men, aged 23 and 30, and a 12-year-old girl remain in hospital for treatment with injuries that are not believed to be life threatening.

Detectives are still working to establish the full circumstances surrounding the attack and are exploring a number of working hypotheses for the motive behind the shooting.

Current lines of enquiry have so far led the investigation team to believe that a shot gun was fired into the crowd on at least two occasions but the weapon is yet to be recovered.

The scene of the incident has now closed, however increased patrols remain in the area and will continue for the foreseeable future.

Chief Superintendent Wasim Chaudhry, Territorial Commander for GMP’s City of Manchester division, said: “We are now more than 24 hours on from this truly shocking attack and our investigation team has been following numerous lines of enquiry in their attempts to establish the full picture of what happened.

“A key part of that work to establish the full picture is information from the community being fed into the investigation team by members of the public.

“The person responsible for this incident recklessly fired a gun into a crowd of people enjoying a celebration of Caribbean culture, which included children. One of those injured by the shooting was a 12-year-old girl who remains in hospital with her family at her bedside but thankfully she should make a full recovery.

“We need to get answers for her family and the loved ones of all the people injured in the incident and we believe those answers may lie within the community.

“I want to urge anyone who thinks they may know anything to please get in touch as matter of urgency. If people don’t feel comfortable contacting the police then people can report information anonymously to Crimestoppers, which is a charity that is completely independent from the police.”