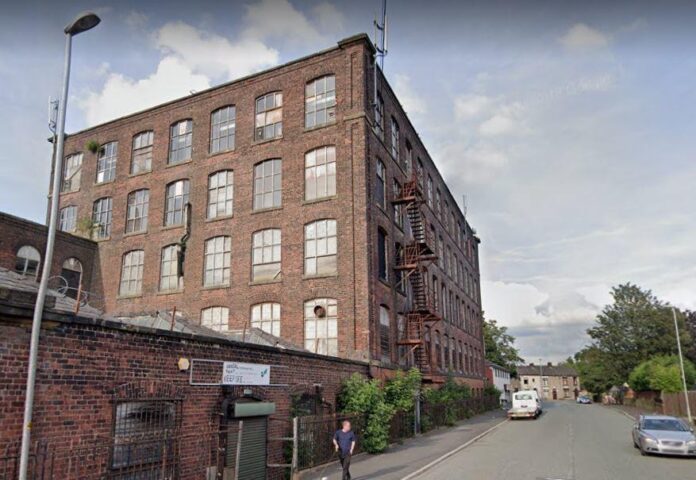 Plans for 72  apartments on the Thornham Mill site have been scaled back following consultation with neighbouring residents carried out by Royton North Labour Councillors Clint Phythian and Hannah Roberts.

Overall residents were divided down the middle about whether they supported the original proposal. Clint and Hannah raised the concerns voiced by residents including that the block was over bearing for neighbours, there would traffic and access problems and the inclusion of a ginnel outside the site in the plans. Following lengthy discussions with planning officers who have raised these concerns with the developers a revised plan has now been submitted.

A block of 60 apartments is now proposed. The arm extending to the back of the site has been reduced in length and height to reduce the impact on residents in Queensgate Drive and Consort Avenue. The ginnel issue has been resolved and minor changes include moving the bike storage into the parking garage and tweaking the access from Oozewood Road.

Councillor Hannah Roberts said ‘ Residents told us that they did want Thornham Mill to be redeveloped for housing but some were concerned that the original design was wrong for the site and would have a bad effect on neighbouring homes. We have pursued the issues raised with us in the consultation and I am pleased that a scaled back design has now been submitted. I know what some people will still object to the apartments and I urge everyone to have their say on the Council’s web site. I intend to speak at Planning Committee when this is considered and would also welcome views either for against the new plans to make sure I am representing residents’ views’

The Planning Department will consider the comments submitted and will also take into account planning policies and views of statutory consultees. A Viability Assessment to agree community contributions by the developer will be independently evaluated. It is too early to say what the recommendation will be but the application will be decided at Planning Committee as soon as a recommendation is agreed.