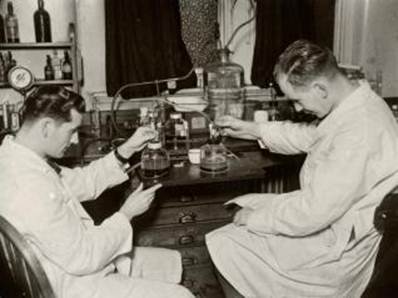 A fascinating collection of more than 4,000 photographs uncovered in the Historic England Archive is giving up its secrets after more than 70 years and is now accessible to the public.

Capturing hospital staff, patients, procedures and practices, the images provide an invaluable and extraordinary insight into medical and nursing practices during the Second World War, and immediately before the foundation of the National Health Service.

One photograph shows Salford’s Hope Hospital.The caption on the reverse of the photograph reads: “Hope Hospital, Salford. Picture shows an everyday incident in the laboratory, with plasma being decanted from stored blood for transfusion purposes. The bottle on the right, form which the air has been evacuated, held 250 c.c. of saline and 250 c.c. of plasma are drawn off from the bottle on the left.”

The Salford Union Infirmary opened in 1879 on the site of an isolation hospital, built in response to overcrowding in other hospitals. The infirmary became Hope Hospital in 1882, and housed the chronic sick, providing accommodation for 880 patients. A home for the elderly and a large extension, completed in 1931, were built to ease overcrowding in the hospital. The development of specialisms followed, and in 1940 the total number of beds was over 1,250.

The outbreak of war prompted work investigating the division of blood into its constituent parts: liquid plasma, the fluid in the blood containing proteins that help blood to clot, was more efficient to transport and store than whole blood. Much of Hope Hospital was destroyed during WWII; it merged with Salford Royal Hospital in 1994 and is now the main site of the Salford Royal Hospital NHS Trust.

Thanks to grant funding from the Wellcome Trust 2,100 images have been digitised as part of the year-long project to conserve, catalogue and digitise the entire collection. The collection is being made accessible to a wide audience for the first time and can be viewed and searched on the Historic England website.

Historic England has also produced resources for secondary school teachers to help students explore the history of medicine as we mark 70 years of the National Health Service in July.

The photographs were taken by the Topical Press Agency, but how and when they were acquired by the Archive remains a mystery. They record improvised wartime hospital wards, blood donation and transfusion, infection control, treatment of burns and early plastic surgery, alongside nurses in training and relaxing in their time off.

Each photograph is accompanied by a typed description which gives extensive background information including date, location and details of equipment and procedure. Many descriptions also include the names of the doctors and nurses shown as well as captions that capture the zeitgeist of the era, such as “the cares of house-keeping and raising a family can play havoc with a mother’s looks and bodily shapeliness.”

Duncan Wilson, Historic England’s Chief Executive, said: “The Historic England Archive is full of countless gems but the Topical Press Agency images are particularly striking. Thanks to the Wellcome Trust we are able to conserve these photographs and share them with new audiences. They have the potential to expand our knowledge of wartime medical practice and revolutionary treatments and help us delve deeper into the history of healthcare.”

Abigail Coats, Archive Cataloguing Officer at Historic England, said: “Working with this collection everyday has been fascinating and a real joy. The photographs reveal health and welfare provision at a time of social upheaval and change. You can see just how far some medical developments have come, but also what has stayed largely unchanged. I’m very proud to be a part of bringing this unique collection back to life and that we’re able to share this fantastic resource with the public.”

Killer of Wythenshawe man in Benidorm remains at large as police and family appeal...