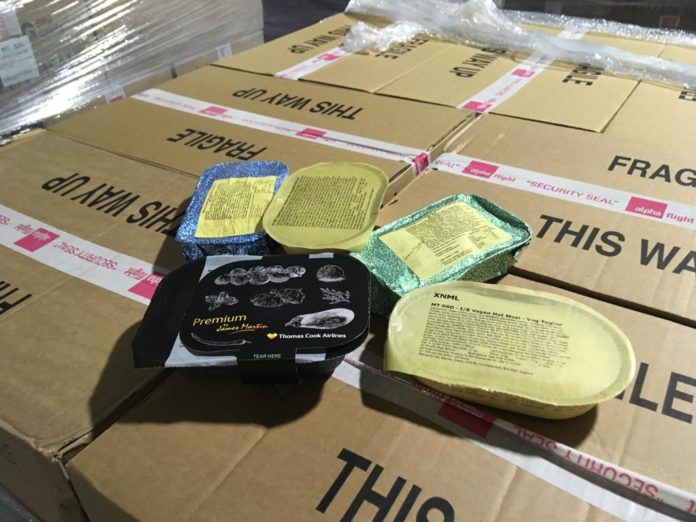 Over a million frozen aeroplane meals that were marked as food waste have been saved, and will now go to feed those living in food poverty in Greater Manchester.
The meals are mostly from Thomas Cook Airlines’ James Martin range, and had been in frozen storage close to Manchester Airport until the coronavirus pandemic began.
With the majority of flights grounded, all 1.1 million meals were due to be destroyed, but have been saved by local food waste social enterprise Open Kitchen MCR.
The meals are now being transported to Lineage Logistics warehouses in Heywood, where they will be stored before being distributed to those most in need.
The COVID-19 outbreak has exacerbated food poverty across the country, with many people’s access routes to food taken away from them during the UK’s lockdown.
With millions of people across the UK – and here in Greater Manchester – struggling to get food, enterprises like Open Kitchen MCR have adapted their businesses to ensure no one goes hungry.
The not-for-profit, which normally intercepts food waste and turns it into food for events, is now cooking and delivering up to 10,000 meals a week.
Those benefiting from Open Kitchen’s efforts include people who were street homeless and are now temporarily housed in hotel accommodation, those who are in self-isolation with underlying health conditions, and those who are living below the poverty line.
Open Kitchen MCR is working closely with Manchester City Council’s Food Response team to support their efforts to coordinate food provision for those in need across the city.
The 1.1 million meals will be distributed across local authorities in the region to feed as many people as possible.
The dishes, which were created by celebrity chef James Martin, include spinach gnocchi with pomodoro sauce, basil pesto and mozzarella; a vegan tagine; and scrambled egg with baked beans and potato rosti.
Lineage Logistics, the world’s largest temperature-controlled food logistics company, has cleared space in one of its -23° warehouses for the remaining meals, which are expected to arrive over the coming weeks.
Corin Bell, founder of Open Kitchen MCR, said: “Before the coronavirus hit, there were 400,000 people that were estimated to be in food poverty in Manchester alone”.
“A lot of the usual routes to access food for people in poverty are not available now that COVID-19 has hit, and it’s essential that we find safe ways to get not just enough food, but good food out to people who need it”.
David Vickers, general manager at Lineage Logistics in Heywood, said: “They’re perfectly good meals, and anything that we can do to help the vulnerable is what we’re aiming to do.
“It’s going to be around 260 pallets – which is about two aisles in our warehouse.”
You can donate to Open Kitchen MCR’s efforts at paypal.me/realjunkfoodmcr
To volunteer, email info@openkitchenmcr.co.uk.

Tameside’s Highways team create their own tribute to NHS staff