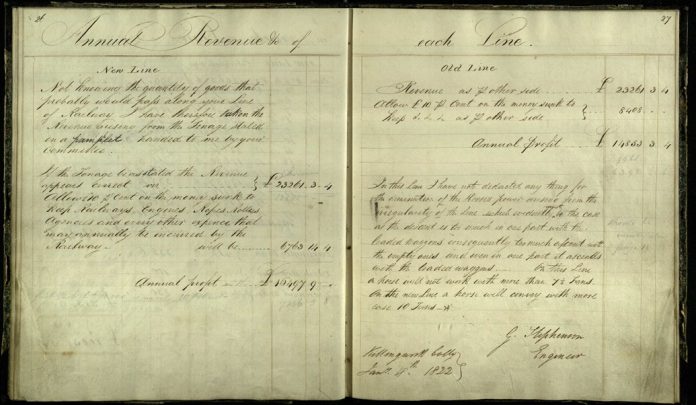 For the first time, members of the public will be able to see detailed plans by George Stephenson – known as the father of the railways – for the world’s first passenger railway to use locomotives.

The notebook, dated 1822, was found by John Page, a records assistant at Network Rail’s archive in York. It outlines Stephenson’s redesign of and budget for the Stockton and Darlington Railway, and became the blueprint for the railways that followed.

John uncovered the notebook, which had not been seen since the 1950s, while searching for documents in the archive’s deeds room in April. There are about 20,000 documents on the shelves; the Stephenson notebook is number 350.

He said: “Because it is a historical document it would never have been loaned out or requested as it didn’t impact the running of the railway so since the 1950s, it has sat on a shelf unnoticed amongst hundreds of other packets.

“I was looking for a deed for one of our internal colleagues and purely out of curiosity decided to look through the packets, and there it was, and what a thrill it was to find.”

The rediscovery means the public will be able to see the notebook for the first time – the National Railway Museum in York unveiled a display of the notebook on 27 September, the 193rd anniversary of the opening of the Stockton and Darlington line.

The notebook shows Stephenson’s survey of fellow engineer George Overton’s original 1821 line and the amendments he recommended to it.

The 12” x 12 notebook is bound in its original form and is written in ink with pencil annotations. It was signed by G Stephenson at Killingworth Colliery on 18 January 1822.

The notebook is going on display until 28 December as part of the museum’s Highlights exhibition in the Great Hall. The exhibition features paintings, medals, handcrafted models and other significant artefacts, many of which are on display for the first time.

Sir Peter Hendy CBE, chair of Network Rail, said: “George Stephenson’s original survey of the Stockton and Darlington Railway ushered in the railway age, not only in Britain, but around the world. Network Rail is delighted and proud to have found this astonishing artefact, and very pleased to have it displayed by our friends at the National Railway Museum. Then, as now, railways were essential to creating economic growth, jobs and housing.”

Catherine Robins, interpretation developer at the National Railway Museum said: “I would like to thank Network Rail for the opportunity to display this notebook alongside other significant items from the collection. This is a rare and historic document which includes many new and interesting details which help bring the story of the railway’s early years to life.”

Sainsbury to cut 3,500 jobs and close its fish,meat and deli counters