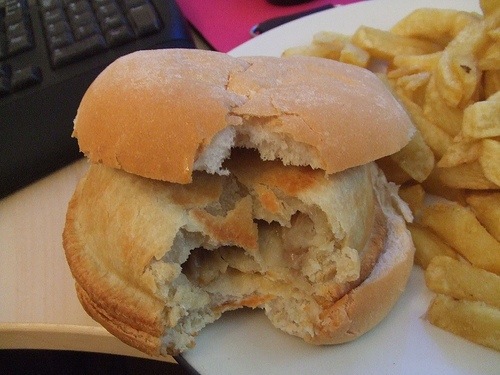 Yes it is true, at least according to a study by the University of Manchester which reveals a North-South divide on how we describe everyday items such as bread, trousers, footwear and evening meals.

Whereas Northerners enjoy a ‘bap’, ‘bun’ or ‘barm’ for their ’tea’, Southerners in ‘trousers’ are more likely to tuck into a ‘roll’ for their ‘dinner’, say the results of a survey of 1400 English speakers by linguist Dr Laurel MacKenzie and her students.

They also show how Northerners and Southerners can pronounce the same words in completely different ways.In an example, ‘one’ and ‘gone’ typically rhyme when spoken by Northerners, but not Southerners. In addition, ‘give it me’ is more acceptable in the North whereas they’re more likely to use ‘give it to me’ in the South

The survey also found that Brummies can’t make up their mind if they’re Northern or Southern: like their Northern neighbours, they rhyme ‘one’ and ‘gone’, but they mirror the South in calling the evening meal ‘dinner’ and fail to rhyme the words ‘foot’ and ‘strut’.

The way we describe soft round bread is also subdivided into smaller regions: ‘bun’ is common in Tyneside, ‘barm’ and ‘muffin’ in the North West, ‘teacake’ North of Manchester and ‘cob’ in the Midlands. Southerners stick to the less exotic ‘rolls’.And only Scousers rhyme the words ‘fur’ and ‘bear’ along with the nearby residents of Merseyside, St. Helens and Wigan.

Dr MacKenzie said: “This research shows a clear North-South divide in many of the words we choose to use when describing everyday items, and the way we pronounce them.Variation is pervasive in language, and often correlates with social factors, like age, socioeconomic status and a person’s place of origin.But it’s not completely clear why different words are used to describe the same thing in different parts of the country. There are sometimes anecdotal explanations — for instance, daps, the South West’s word for sports shoes, is said to be an abbreviation of Dunlop Athletic Plimsolls — but they’re often hard to verify.”

She added: “The source of regional differences in pronunciation is often more clearly understood. Changes in pronunciation may start in a particular area and spread outward, but be stopped or slowed down by political or geographical barriers.The Northern way of rhyming the words ‘put’ and ‘cut’, for example, is faithful to how these words were pronounced centuries ago. Speakers in the South of England moved away from this pronunciation in the 1500s, but their way of saying these words didn’t make it to the North.
However, we’ve compared our maps to those put together a few decades ago, and it looks like the Southern pronunciation is slowly creeping northward.”