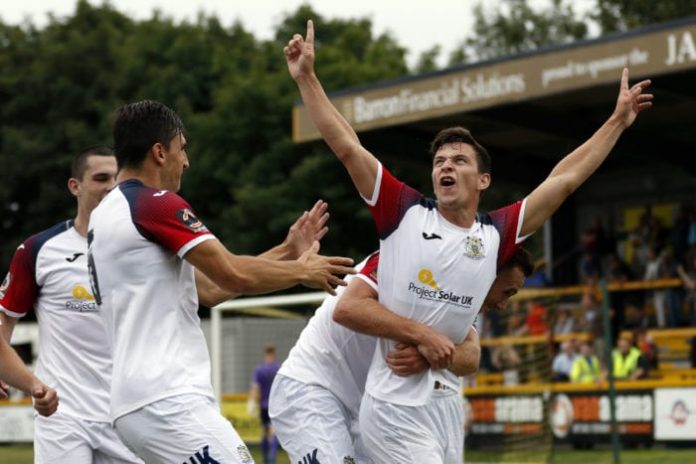 Salford City are finding life in the Conference Premier League difficult, the club falling to its second successive defeat this time at Sutton United.

The day had started well for Graham Alexander’s men who went ahead courtesy of a 20th minute header from Carl Piergianni but ten man Sutton clawed back the three points courtesy of Craig Eastmond and Ross Lafayette.

In the Conference North Stockport County are fourth after three games following a 1-0 win at Southport thanks to substitute Connor Dimaio, who netted five minutes from time.

Altrincham were one haf of a eight goal thriller at Spennymoor,Alty three times let a lead slip to return to Cheshire with just one point when three might well have been amassed.

Ashton were also denied all three points after they led 3-1 at Kidderminster, Matty Chadwick putting the Robins in front after just three minutes and Matt Regan doubling the lead just three minutes later.The Harriers came back just after the break but Ashton restored their two goal lead through Evangelinos depsite being down to ten men,Chambers volleyed home at the near post to bring it back to 3-2 before Kane Richardson headed home for the leveller.

Curzon Ashton fell at home to early promotion contenders Hereford,Harry white scoring the only goal of the game.

Worrying times for FC United who have now lost their first three games and having conceded 12 goals.Saturday’s three nil defeat at home to Boston leaving the Reds firmly routed to the bottom of the table.A brace from Brad Abbott on 23 and 85 minutes and another goal from Andre Johnson 1ith 13 minutes to go gave the visitors a comprehensive victory.

Bolton’s game against Brentford will not be played this week