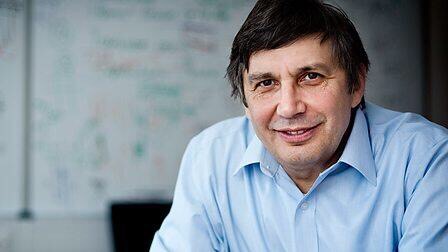 The Museum of Science and Industry is delighted to offer a rare chance to hear the Nobel Prize-winning physicist Professor Sir Andre Geim talk about his life and work at the museum in a free adults only evening event on Thursday 29 September.
In conversation with author, journalist and museum executive Roger Highfield, Professor Sir Andre Geim discusses his unique, playful and creative approach to scientific research, from levitating frogs to the ground-breaking experiments such as the isolation of graphene which earned him his coveted Nobel Prize in Physics in 2010 alongside Professor Konstantin Novoselov. Geim will also talk about how graphene has paved the way to a range of other remarkable 2D wonder materials with extraordinary properties.

A Professor of Physics at the University of Manchester and Royal Society Research Professor at the Manchester Centre for Mesoscience and Nanotechnology. Geim also received an Ig Nobel Prize in 2000 for using the magnetic properties of water scaling to levitate a small frog with magnets. This makes him the first, and thus far only, person to receive both the prestigious science award and its tongue-in-cheek equivalent.

Preceding the evening’s talk, visitors have an opportunity to visit the museum’s popular Wonder Materials: Graphene and Beyond exhibition, the UK’s first major exhibition on graphene, which opened to great critical acclaim in July. Featuring a specially commissioned poem by Lemn Sissay and the World Premiere of Random International’s first ever digital art work, this exhibition celebrates and showcases the inspiring story of graphene, its incredible properties and its potential to change our lives.

Sally MacDonald, Director of the Museum of Science and Industry comments: “We are delighted that Andre has taken time out of his demanding schedule to share with us his great knowledge, insight and personal experiences with this remarkable material. It is a real coup for us as a museum and a fitting finale to Manchester’s year as European City of Science to be able to host such a high profile and exciting event for our visitors.”

Tickets: Free but must be purchased in advance via http://www.msimanchester.org.uk/en/whats-on/activity/in-conversation-professor-andre-geim

*Due to the popularity of this event, attendees are only permitted to book a maximum of 4 tickets per transaction.