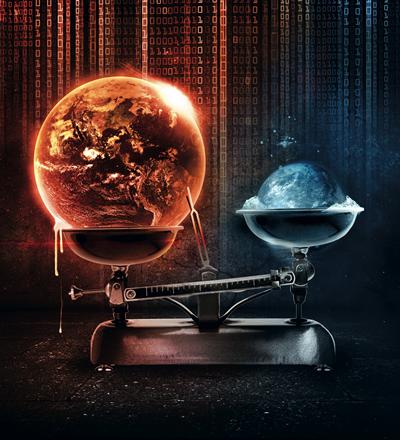 New research from the University of Southampton and the Laboratory of Physical and Spatial Oceanography, in Brittany suggests that the average temperature of Earth’s atmosphere and oceans will be abnormally warm, beyond the current global warming trend, over the next five years.

The study, published in Nature Communications, revealed that until 2022 global temperatures are likely to be above the current trend, largely due to the decreased likelihood of extreme cold events.

In a changing climate, there is an ever-increasing societal demand for accurate and reliable yearly predictions. The challenge, however, lies in the chaotic nature of the climate system limiting prediction accuracy on such timescales.

For the purpose of this study the team developed a new method to predict the average temperature of Earth’s atmosphere and oceans.

Named PROCAST (PRObabilistic foreCAST), the system has the advantage of being extremely efficient numerically, with predictions obtained in a few hundredths of second on a laptop, compared to a week on a supercomputer for state-of-the-art prediction systems.

Dr Florian Sévellec, Associate Professor in Ocean Physics at the University of Southampton and lead author of the paper, said: “We developed the PROCAST prediction system to forecast the average temperature of the surface atmosphere and ocean.

“Accurate and reliable predictions for the next five years of global temperatures are key for determining the regional climate change impacts that scale with global temperature, such as precipitation extremes, severe droughts, or intense hurricane activity, for instance.

“We show that the 2018-2022 climate is likely to be warmer than expected by the solely long-term forced global warming trend.”

In particular, the likelihood of an extreme warm event of the ocean surface has ramped up by more than 150 per cent for the period 2018-2022.

Dr Sévellec added: “PROCAST does not specifically focus on long-term climate change, which is occurring given the level of CO2 in the atmosphere. However, around this anthropogincally-forced-climate change there is a natural variability of the climate that could totally or partially offset or, at the contrary reinforced, the long-term trend.

“Our work shows that this warm phase is reinforcing the long-term climate change, and that this particular phase is expected to continue for at least five years.”