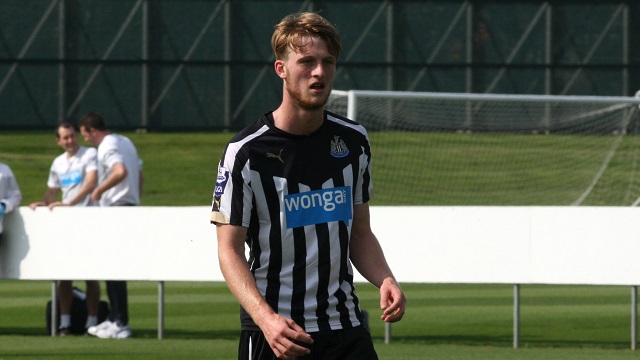 A product of the St James’ Park youth system, Tom Heardman will spent the 2017-18 season as a Shaker after joining the club on a season long loan.

21-year-old Tom has been close the Toon Army’s first team but an injury forced the youngster to drop down in then manager Steve McLaren’s plans. Since returning from injury, and spending time on loan at Hartlepool United, Tom has done enough to impress Rafa Benitez to such an extent that he was rewarded with a new deal towards the end of last season.

Standing at six feet four inches tall, Tom joins the Shakers in search of league experience as he looks to progress in search of first-team football at St James’ Park.

“Tom is a really good young player that I have been monitoring for around a year now at Newcastle United. I’ve seen the progress that he has made and he will be a different type of striker to the ones that we already have here at the club.

At six feet four, he is a good target man, he has a lot of ability and a good touch on the ball. He works hard, works the channels. We also feel that we can help him develop and he can also be an asset for us over the coming season so we are delighted to get him on board with us.”

Umbro asks Manchester What does Football mean to you?