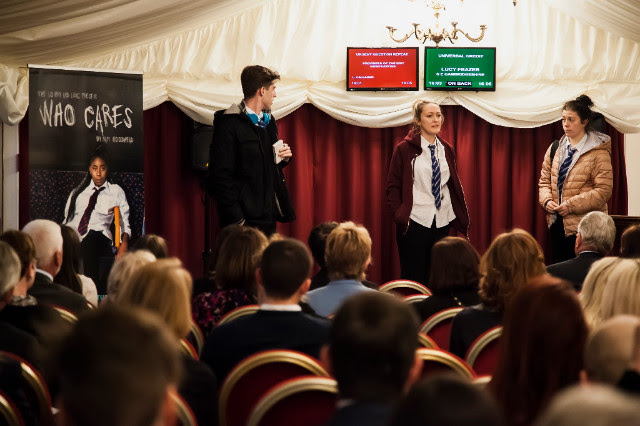 The UK tour of a play about young carers in Salford drew to a close last night (Tuesday 5 December) with a special performance at The House of Lords in Westminster.

The show, Who Cares, featured interviews with young carers about their lives and seeks to help identify ‘hidden’ young carers in society – those who provide care under the radar of their friends, schoolteachers and local authorities – and signpost them to the support available.

MPs took to Twitter to praise the performance, with Salford and Eccles MP, Rebecca Long-Bailey, saying she was “absolutely knocked sideways by performance at the House of Lords today. What a strong and inspiring group of young people doing Salford proud.”

Worsley and Eccles South MP, Barbara Keeley, who was interviewed as part of the research for the show, tweeted she was “so proud of young carers from Salford” while Oldham West and Royton MP, Jim McMahon said it was an “extremely moving and inspirational performance…”

Julia Fawcett OBE, chief executive of The Lowry, said: “The arts are a great way to facilitate social change and we are proud to have presented Who Cares to MPs and peers at The House of Lords.

“The Westminster performance was the culmination of a five-week national tour, during which time thousands of young people have gained a unique insight into the lives of young carers and have learnt what steps they can take to help. It has also reiterated the importance of the work delivered by local Young Carers Services at a grassroots level. So although this tour has now come to an end, there is still much to do and we will work alongside our partners to ensure the stories of these brave young people continue to be told.”

Who Cares was written by Matt Woodhead and co-produced by The Lowry andLUNG Theatre. It was made in partnership with The Gaddum Centre’s Salford Carers Service and premiered to critical acclaim at The Lowry in November 2016.

Manchester Kids say: We want to bee heard after Arena attack as they get...