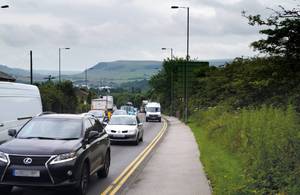 Highways England has appointed Balfour Beatty Atkins as its delivery partner to design and construct the new bypass which will take traffic away from the village of Mottram in Longdendale.

A public consultation on the scheme is now being planned for this winter, and a planning application is due to be submitted next year. If the plans are approved by the government then work on the project could start by spring 2023.

Around 25,000 vehicles currently travel along the A57 through Mottram every day, including over 2,000 HGVs. The village is on the key 25-mile trans-Pennine route between Manchester and Sheffield, connecting the M67 in the North West to the M1 in Yorkshire.

The new dual carriageway would run from the end of the M67 (junction 4) and through a new underpass to the north of Mottram in Longdendale. The road would then join the A57 east of the junction with the A6018 (Black Moor).

A new single carriageway road is also being planned to link the A57 from Mottram Moor to Woolley Bridge, taking traffic away from the current route of the A57 along Woolley Lane.

We’re pleased to have a contractor on board for the bypass which will take traffic away from Mottram in Longdendale, and provide quicker, safer and more reliable journeys for thousands of drivers every day.

The bypass is part of a series of improvements we’re planning to improve journeys on the trans-Pennine route between Manchester and Sheffield, along the A57, A628 and A616.

We can now start the detailed design work for the bypass and expect to be able to hold a public consultation on our proposals this winter.

All change for Metrolink this Sunday as zonal fares begin