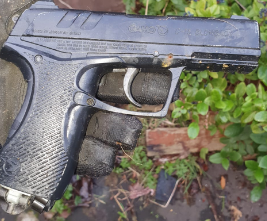 recover three weapons – namely a shot gun, a revolver and an imitation firearm. All the items have been taken for forensic examination.

This adds to previous finds in Lower Kersal a week ago (Friday 20 November) where a shot gun cartridge and 11 9mm bullets were found, and in Weaste earlier this month where approximately four kilograms of Class A drugs and 30 unspent shot gun cartridges, which have been submitted for forensic evidence for ongoing investigations as part of GMP’s dedicated Operation Naseby.

The work is part of Op Naseby’s disruption hub – formed in April earlier this year to reduce the activity of local organised crime groups.

Since the inception of the disruption hub, there have been 134 arrests, 126 vehicles recovered, and 51 house searches.