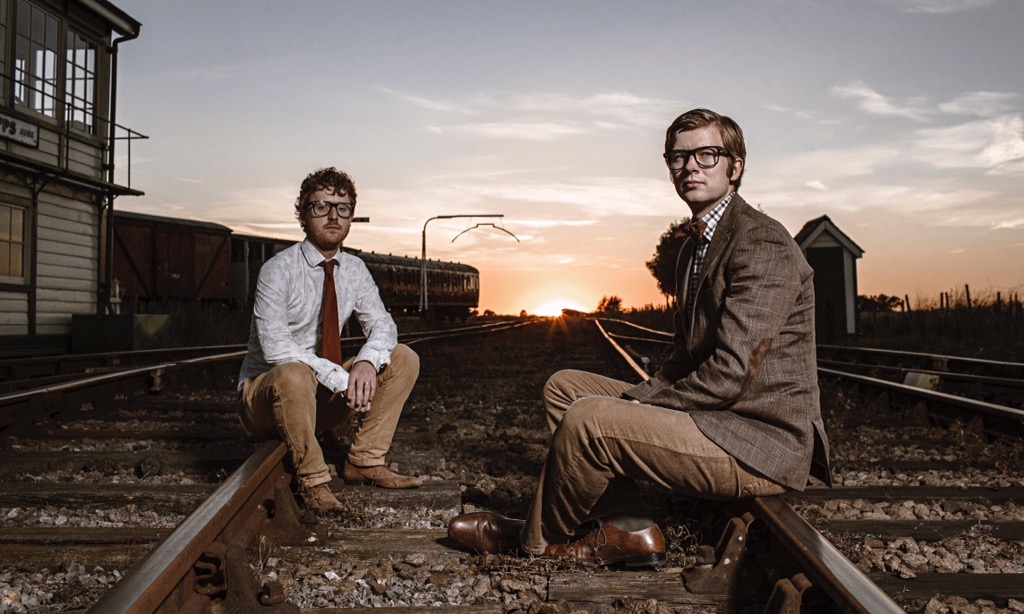 The Ramsbottom Festival has announced Public Service Broadcasting as its Friday night headliner and over the weekend, some of Manchester’s top new acts including Larkins, Delamere, Ist Ist and Elbow guitarist Mark Potter’s band, The Plumedores, will be taking to the stage along with Newcastle’s acclaimed Smoove and Turrell.

Adding to an already brilliant line up that includes Julian Cope on Friday, Gaz Coombes on Saturday and Fun Lovin’ Criminals on Sunday night, this three day festival brings top quality live music to the Lancashire town of Ramsbottom on 16th-18th September.

This is Public Service Broadcasting’s second appearance at the Rammy Festival, having first performed on the main stage back in 2013. This is just one of just a handful of festivals the London-based duo will be playing this summer and their unique live AV transmissions see them weave samples from old public information films, archive footage and propaganda material around live drums, guitar, banjo and electronics.

Catering brilliantly for families by day or a chilled night out with friends; Ramsbottom Festival has a distinctly Northern flavour, with local food, fantastic local craft ales and a superb family arts and entertainment programme. The festival brings a wide spectrum of music into one space to enable audiences to discover new artists and musicians alongside some established big names.

Made up of multi-instrumentalists J Willgoose, Esq. and Wrigglesworth, the duo released their second album, The Race For Space, in February 2015 with two special shows at the National Space Centre. The album went on to chart at #11 in the UK and spent a further 5 weeks in the Top 40.

Since meeting at college in Manchester in 2012, Larkins have built a reputation as an indie rock four piece. Last year’s debut EP “Hit and Run” grabbed attention from the BBC and XFM, since when they’ve been gigging solidly, with festival slots at Blackthorn, Kendal Calling and now Ramsbottom.

“Indie Rock n’Roll is what Larkins do and they intend to provide us with the big bold anthems of the future” Jo Good, XFM

Anthemic and infectious stadium ready tunes. Having broken onto the Manchester music scene with a sell out show at the infamous Deaf Institute, Delamere are building on their already cult-like following.

Holy Moly and the Crackers

Seven-piece Holy Moly and the Crackers play an eclectic hotchpotch of stomping folk, bluesy lullaby and gypsy madness that’s sure to melt the stoniest of hearts.

“They deliver their punky, fiddle flying, Cajun dancing, raucous hoe down with a huge burst of energy” Supajam

Since White Boy burst on to the scene in February 2015 with their debut single Kiss and Run, they have created a buzz on the Manchester music scene, selling out their first gigs at Manchester’s Soup Kitchen and Deaf Institute.

“An epic sound, a devilish swagger, this lot are going to be huge. Get on White Boy now!” GigSlutz

On Sunday the line up includes Lynched; multi-award-winning Gordie MacKeeman & His Rhythm Boys; Rusty Shackle; Duke Special; Wille and the Bandits; Sounds of the Sirens and headliners, Fun Lovin’ Criminals. They will be joined by the following newly announced acts:

Newcastle’s finest Smoove and Turrell are at the peak of their funk and soul powers; and with three critically acclaimed albums under their belt, radio support from Giles Peterson and Craig Charles and a jam packed touring schedule, there’s no sign of them letting up. Broken Toys, their latest album, is a fun filled ball of energy drawing from their funk and northern soul roots.

Hitting Ramsbottom with their motley crew of Geordie reprobates, Smoove and Turrell are sure to expand their loyal fan base even further.

“To say Smoove and Turrell are one of the greatest modern Soul acts to emerge from the UK would be an understatement.” Craig Charles (BBC 6 Music)

The Plumedores is a three-piece blues, folk and roots band fronted by Danny McTague and Elbow guitarist Mark Potter. Their music comes from a mixture of delta blues, jug bands, country, folk and rock and roll. Adding harmonica and rich vocal harmonies to electric, acoustic and slide guitars, they use a vintage drum machine as used by J.J. Cale on the song “Call Me The Breeze”. Songs are rambling and organic, in non-standard structure, with a raw, stripped back sound, the occasional whisper of psychedelia and an improvised, skiffle feel doing just enough to keep things at the outer edge of ‘holding together’ and ‘falling apart’. Every song is a journey unfolding.

A new york busking sensation featured on BBC’s Later last month, Moon Hooch is comprised of 2 saxes and a drummer playing their own blend of house, dubstep, and jazz that they call Cave Music.

On new album ‘Red Sky’ the band uses everything they’ve learned from their whirlwind journey from New York subway to the worldwide stage, to push their sound to new heights, bringing together the raw, transcendent energy of their live performances and the sleek sophistication of their studio work into a singular, intoxicating brew.

Describing their sound as crack rock punk, East London’s False Heads have won acclaim from the likes of NME, Drowned in Sound, Clash and Q Magazine as well as radio support from BBC Radio 1, BBC 6 Music and Radio X.

“Propulsive, energetic songwriting, those pastoral, deeply English melodies are matched against a raw sense of destruction. Check it out now” CLASH Magazine

Manchester’s ist ist have generated a massive word-of-mouth buzz for their eardrum-rattling take on post-punk, goth-rock and industrial noise.

For more information or to be the first in the know, sign up for the email newsletter at www.ramsbottomfestival.com

How a bus for the homeless is helping hospitality sector diversify when it comes...

Road gritter who helped man on fire in Harpurhey is rewarded

A Wedding Drama at Manchester Cathedral, Medieval Myth-Making and Unlocking the Royal Charters