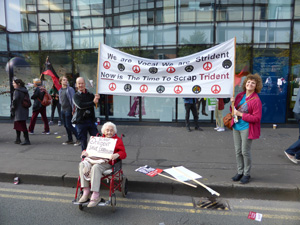 The Activist Betty Tebbs, who led women in the first strike for equal pay at a Bury mill, has died at the age of 98.

Betty joined her first trade union at 14, lost her first husband in WWII and spent her entire life working for rights for women and workers, global peace and justice and nuclear disarmament.

Born in the last year of the First World War, she started her first job in a paper mill in Radcliffe at the age of 14.

Realising that the boys working on the same machine as her were being paid 3 shillings a week more just because they were boys, she complained to a colleague and was told “you want to go upstairs and see this woman who organises the union.”

Betty’s first husband, Ernie, was killed in WWII, by which time they had a young daughter.

In the early 1950s she successfully led women in the first ever strike for equal pay in the East Lancs Paper Mill in Bury.

She spent 17 years there creating a strong trade union that fought for equal rights across the board.

She has been involved in international peace negotiations, she was the President of the National Assembly for Women, and she has been banned from America. When she was 89 she was arrested for her anti-Trident protests and continued to campaign well into her nineties.

Speaking in an interview back in 2009 she said of her life:

“It’s not all grind – what you get back from it are life long friendships and understanding, and I feel privileged – that I met Len and he told me how things worked together and how things worked out. He once said to me, ‘I’d not have married you if I didn’t think that you’d be good behind the barricades’! I think I’ve had a good life – and it keeps you going! I’ve often said I don’t know what I’d do if peace broke out! But it’d be lovely, wouldn’t it?”