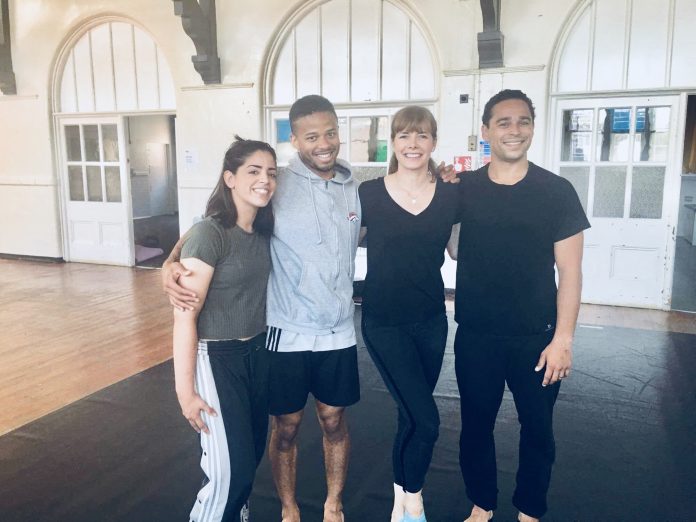 Manchester dance company, Company Chameleon, feature in a new BBC Two documentary with Darcey Bussell, which will be broadcast on our screens on Saturday 1 December at 9pm.

The one-off documentary titled Darcey Bussell: Dancing to Happiness investigates why dance, more than any other form of exercise, has such a positive effect on mood and behaviour.

In her quest for answers she visits Company Chameleon and follows Kevin Edward Turner, the Company’s Co-Artistic Director, as he leads a series of workshops with young people from mental health charity, 42nd Street.

Kevin Edward Turner said: “I’m a great believer in the power of dance, as I know how it has helped me in my life, specifically in relation to my own experience with bi-polar disorder. In this project with 42nd Street, young people who are struggling with their mental health, were given the space and opportunity to explore their own challenges and feelings through dance and movement.

Over six-weeks of workshops, Darcey came in and observed the project and the creative process as it unfolded. She questioned me and the young people, commented on the process and gave her feedback and some really lovely insights to the group. She was full of curiosity and respect and her presence created a positive energy in the room.”

Since her retirement from professional ballet, Dame Darcey Bussell has become a formidable advocate for promoting dance in all areas of life. She believes that dancing is vital to keep her on an ‘even keel’ and thinks that it can be an important tool for everyone’s mental health.

Talking about the documentary on BBC Breakfast earlier this week, Dame Darcey Bussell said: “Dance helps us emotionally and helps us express feelings we don’t know how to express verbally. It makes us understand what we’re going through. It’s been the most amazing journey for me to see people use dance in different ways.”

Kevin Edward Turner said: “From touring with Company Chameleon, performing as a professional dancer and through delivering workshops, I’ve seen the positive impact that seeing and taking part in dance can have on people. This is something I’ve seen again and again all over the world and the documentary demonstrates this.

It shows the transformative power of dance and how it is a positive force for everyone involved – physically, emotionally, socially and psychologically. It’s engaging viewing as you get to see the shift and transition that the young people make. As their ability to engage with their feelings and express them through dance increases, so does their confidence and self-belief, and this is so inspiring to see.”

Alongside spending time with Company Chameleon, in the documentary, Darcey also attends dance sessions for the elderly and newly retired, and dance classes and therapy for those with Dementia and Parkinson’s.

Simone Spray, Chief Executive Officer at 42nd Street said: “The project between Company Chameleon and 42nd Street really brings into focus the hugely positive impact that being given the space and support to express yourself through dance can have on mental health and wellbeing. The young people involved did not see themselves as dancers, but they were encouraged and inspired by Kevin’s honest coaching skills and Darcy’s interest and they were able to achieve a new level of insight and self- confidence. Many of the young people have previously tried a whole variety of different therapies and treatments over the years and for some, this project has resulted in higher levels of recovery than anything else.”

Set-up in Manchester in 2007 by local lads Kevin Edward Turner and Anthony Missen, Company Chameleon creates dance theatre productions in the city, which tour across the world, staging over 50 performances every year.

This month the Company was nominated for a Manchester Culture Award for Best Performance for Illuminate, a site-specific piece of dance, music and light art created and directed by Kevin Edward Turner for Manchester Central and branch libraries. Company Chameleon is supported by Arts Council England and is part of Manchester City Council’s cultural portfolio.