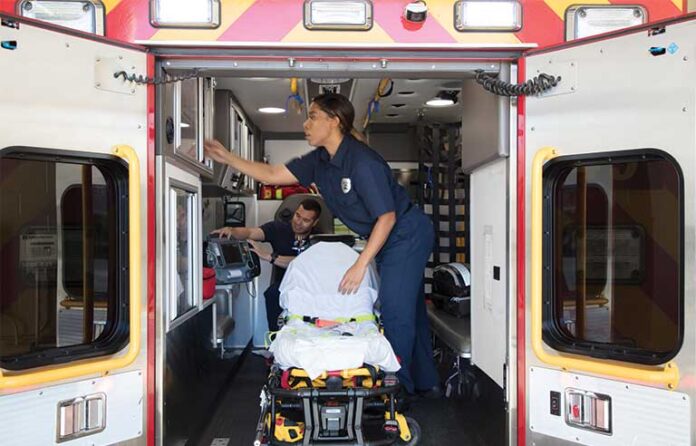 Ambulance workers who took part in a University of Manchester led study have told of the complex  challenges they face in responding to suicide without adequate training and support.

The qualitative interview study by experts at Manchester and Keele University, funded by the National Institute for Health Research is published in the journal Frontiers in Psychology.

The ambulance workers told the research team that as first responders to the scene of a death by suicide that they are exposed to many distressing suicides during their working lives, including the suicide of colleagues, and all had been personally bereaved by suicide.

They are often faced with managing distressed friends and relatives of the deceased with little professional training in how to respond to those bereaved by suicide and there is little acknowledgement in the workplace that suicides may be traumatic, opportunities for staff debriefing are rare, and staff are reluctant to access work-based support services due to potential stigmatisation.

Though limited by a relatively small sample of 9 people from one English ambulance service in 2014, its themes, say the researchers, may be relevant in other parts of the UK and beyond.

“We know ambulance staff are exposed to suicide related incidents on almost a daily basis. However, we fail to identify, acknowledge and address their unmet needs dealing with this issue, despite our awareness that exposure to suicide, is a known risk factor for further suicide,” said Dr Sharon McDonnell, Honorary Research Fellow at The University of Manchester, Managing Director of Suicide Bereavement UK and PI of the study.

“All participants in the study reported losing at least one colleague to suicide.  This finding alone highlights the urgency of future research, exploring the magnitude of this problem.”

She added: “Ambulance staff reported feeling helpless, hopeless, ill-equipped and unsupported in the workplace, when exposed to suicide. This issue was especially pertinent when they encountered intense grief reactions from those bereaved by suicide. The urgency of providing high quality care, support and training to assist and empower staff to manage these profoundly distressing circumstances cannot be underestimated.”

Has the NHS reached its breaking point?