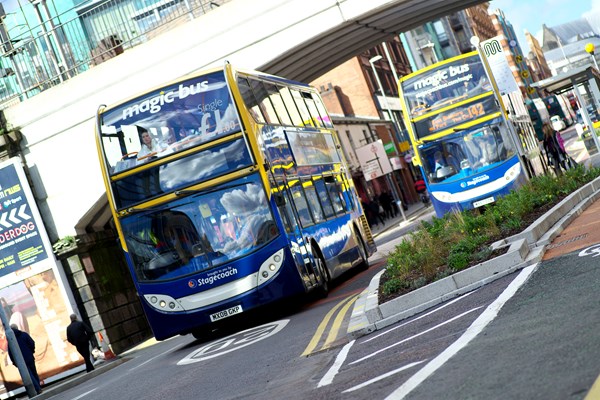 Bosses at Greater Manchester Franchise Stagecoach have reacted to the beginning of public consultations on the future of its bus services.

Yesterday Greater Manchester announced that it will be the first city-region in the UK to hold a public consultation on the introduction of a bus franchising scheme, using powers available under the Bus Services Act 2017.

Bus franchising is currently in place in London and other major global cities, and means bus services – including routes, timetables, fares and standards – would be brought under local control. Greater Manchester would coordinate the bus network and contract bus companies to run the services, with any profit being reinvested in the buses.

An assessment prepared by Transport for Greater Manchester (TfGM) has compared the proposed franchising scheme with other realistic options – including new partnerships with the bus companies or leaving bus services as they are now.

It found that the proposed franchising scheme would be the best way to meet Greater Manchester’s objectives and future vision for buses. That includes a joined-up integrated bus and public transport network, simple fares and ticketing, an improved customer experience, and better value for money.

GMCA Vice Chair, Councillor Brenda Warrington said: “Buses play a crucial role in our society, helping people make millions of trips every year to work, shops and education, to see friends and family, enjoy the many cultural and leisure opportunities Greater Manchester has to offer, and to access essential healthcare.

“But we need better bus services. Buses are an important part of the ‘Our Network’ ambition to create a modern and accessible public transport system for Greater Manchester. One which brings together different modes of transport into a joined up, ease-to-use system with seamless connections, simple ticketing and an aspiration for capped fares.

A Stagecoach spokesperson said: “Buses are the cornerstone of Greater Manchester’s economy and communities. It’s crucial that both people who use the bus, and those who don’t, have their say on the future of bus services, because local taxpayers would ultimately foot the bill for franchising.

“Greater Manchester residents have an alternative option, and it is not a choice between the bus service they have now or franchising. Partnership proposals developed by bus operators will deliver multi-million-pound investment in integrated ticketing, better value fares, electric buses and many more improvements – all much sooner than through franchising and with bus companies rather than taxpayers covering the cost.

“The huge cost of franchising our buses could be better spent on investing in social care, schools and policing – as well as tackling crippling road congestion, which is the biggest barrier to providing better and more attractive bus services.

“We would urge the people of Greater Manchester to consider the options for bus services and their implications very carefully. If local people want to see lower fares, a more joined up transport system, and investment in their bus services without a massive bill, they should choose partnership and reject franchising.”

How heather could help to solve the UK’s energy needs