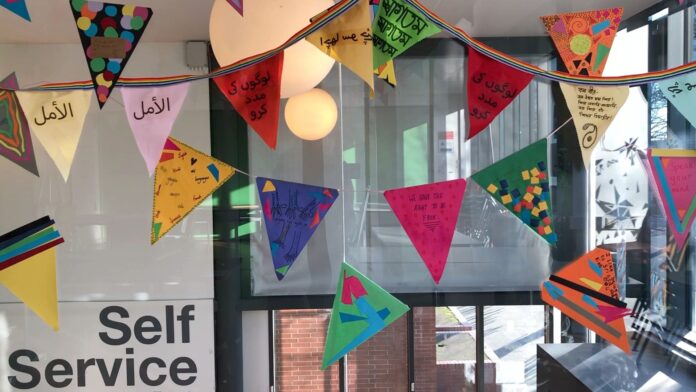 Manchester City of Literature and partners return for 2022 with a three-week celebration of live and digital events running between 17th February – 8th March, centred around UNESCO’s International Mother Language Day (IMLD), which is celebrated globally on 21st February.

Manchester, known as the ‘UK’s language capital’ with over 200 languages spoken, will come together for a celebration of cultural diversity, for all generations, taking in poetry, translation, community identity and international connections, and involving libraries, cultural venues, community groups, universities, schools, poets and writers.

Highlights include: Cooking with Words, a creative feast from writer Anjum Malik and the chefs at the award-winning Zouk Tea Bar & Grill; the opportunity to contribute to the multilingual ‘Made in Manchester’ poem, which so far features verses in over 70 languages; family fun days at venues across the city; and the unveiling of Manchester’s multilingual City Poets, who will be appointed to produce five original poems on behalf of the City throughout 2022.

This is Manchester’s fifth consecutive IMLD series, and this year 2022 the cultural content of the programme is increasing, making international links with other UNESCO Creative Cities, particularly through online platforms, in addition to events across the city at venues including Manchester Libraries, Manchester Poetry Library at Manchester Metropolitan University and Creative Manchester, and many more.

In 2019 and 2020 over 5,000 people engaged with activity across Manchester’s city centre and neighbourhoods, and in 2021, 18 digital events ensured the significance of languages to Manchester was still honoured, even while the nation had to stay at home during the pandemic.

IMLD has been observed globally since 2000 and has important historical roots. In Bangladesh 21st February is the anniversary of the day when Bangladeshis fought for recognition for the Bangla language.

Manchester City of Literature has created the new Manchester City Poets team to work across its partnership network, acting as ambassadors for Manchester’s residents, communities, and literature organisations.

The City Poet roles carry a civic responsibility, much like conventional Poet Laureate designations, and the appointees will be commissioned to produce five original poems on behalf of the City.

Three of these poems will respond to Manchester Day, World Poetry Day and the Festival of Libraries; all of which will be taking place in 2022. The two other commissioned poems will be delivered to respond to other exciting public events, projects and community outreach programmes coordinated by Manchester City of Literature and its partnership network. The poets will also translate other poets’ writing.

Manchester has a rich literary tradition, as home to some exceptional and high-profile poets, a thriving poetry and spoken word scene, awarding-winning publishers and writing development agencies and libraries which place writing and community outreach at the heart of their work. This heritage is represented in Manchester’s designation as an UNESCO City of Literature in 2017.

Manchester Poetry Library at Manchester Metropolitan University is celebrating poetry at an open day for International Mother Language Day 2022. View special displays of books from our co-curated languages programme. Contribute to the multilingual ‘Made in Manchester’ poem, which so far features verses in over 70 languages.

There will be three free events:

Working with local restaurant Zouk Tea Bar & Grill, writer Anjum Malik will collaborate with the chefs and incorporate their recipes to cook up new multilingual poetry that responds to experiences of South Asian culture.

At this afternoon event, the award-winning Zouk head chefs will be crafting some very special dishes to reflect International Mother Language Day and its uniqueness.

Anjum Malik will perform the new writing during the event, where you can get a ticket to dine and be an audience member for the evening, immersing yourself in the tastes and cultures of International Mother Language Day in Manchester. This event promises to leave bellies and hearts equally full.

Booking information will be available soon, please note that there will be a limited number of 45 tickets available to the general public.

Communities across Manchester will come together to enjoy an afternoon of celebration for all the family. Sharing their stories, language, music, dance and food, it is sure to be a joyful gathering.

Confirmed for this year are the Lithuanian Community, and for the first time in our event history, members of both the Libyan and Moroccan Amazigh community will be joining together to share their cultural heritage with everyone.

Kathputli Utsav celebrates the skill, talent and culture of the Kathputli Colony, a colony of street performers in Delhi, India. The event will celebrate linguistic and cultural diversity of the colony, and showcase some of its great artists, with performances of traditional Indian arts.

These performances will be followed by an ‘in conversation’ with Ruth Daniel (CEO, Artistic Director, In Place of War) and Vijay Maitri (community leader and a theatre artiste), with more to be confirmed.

Presented in partnership by The University of Manchester’s Humanitarian and Conflict Response Institute and Creative Manchester. This event can be attended both in-person and virtually.

Details on these, and many more events can be found here:

Research finds Smokers across the North West more likely than Non-Smokers to be Without...