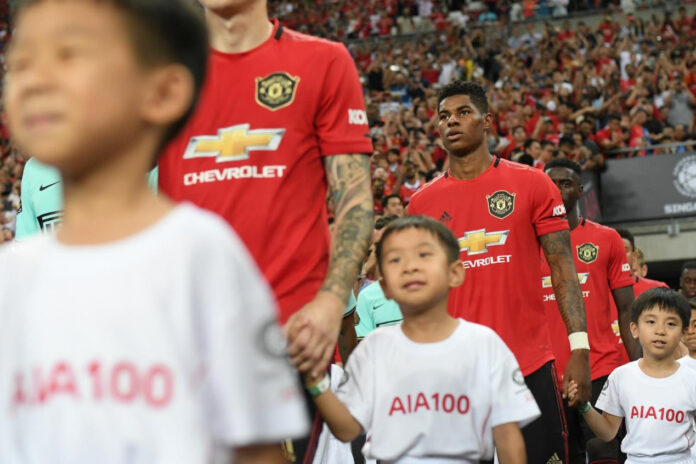 Eleven prizes were awarded at the prestigious annual celebration of Great Coaching – the UK Coaching Awards, which were hosted virtually by Olympian and broadcaster Jeanette Kwakye on Thursday, 3 December.

The awards showcase the diverse work of coaches, projects and organisations, making a huge difference to the health and happiness of the nation, especially against the backdrop of the coronavirus (COVID-19) pandemic.

The Coaching Chain, which celebrates the contributions of several coaches to an athlete’s journey to success, was this year awarded to the coaches of Marcus Rashford MBE.

The England forward, who hails Wythenshawe, has been a fantastic performer for the Red Devils since making his first-team debut aged 18. This year, after campaigning successfully to persuade the Government to extend free school meal vouchers during the summer holidays; receiving an MBE from the Queen for his services to vulnerable children during COVID-19; and attracting a million signatures on his petition to end child food poverty, we were duly reminded of the 23 year-old’s razor-sharp striking ability when he disposed of RB Leipzig in the Champions League with his first senior hat-trick for United.

Picking up the High Performance Coach of the Year award was Peter Rome. The wheelchair fencing coach bolstered a formidable GB disability fencing team, when he joined them six months before the 2016 Rio Paralympics. A silver medal for one of the two athletes who qualified, signalled the start of a successful era, with UK Sport funding allowing him to start a world class programme, with athletes like Piers Gilliver, who are now a major force on the world stage – having won 20 international medals or more in each of the last two years.

Rome sets high standards but has the total respect and buy-in of his athletes by remaining calm under pressure, patient and clear in his messaging, and always leading by example.

“The shock is still settling in. It was an amazing ceremony, even under the circumstances. To still get the inspiration and see the depth of coaching within the UK was just phenomenal. It was inspiring just to see all the presentations. It brought back memories of when I was a grassroots coach and working in clubs and communities. I’m obviously very delighted to win the award, but it was an amazing event and very well hosted.

“It was inspiring to see what people have done [this year], to be a coach in this environment. To give that joy, that enthusiasm. To develop people through many different scenarios has been an eye-opener and it’s almost ‘what I can learn from [these coaches]’ as well. It makes me want to continue to develop.”

Labelled “one of the best” by former Celtic and Scotland striker Kenny Miller, Donald Park won the Lifetime Achievement Award, to recognise his achievements through a lifetime dedicated to coaching.

Originally from Lochaber in the Highlands and affectionately known as ‘Parky’, his impact on Scottish football has stretched far and wide. Across his career, which spans five decades, he has been a player, coach, manager, coach educator, volunteer and member of staff with the Scottish FA. His reach has largely included working with young Scottish talent at grassroots clubs, professional clubs and at international level.

“If I’m being completely honest, it’s an absolute shock to receive this award. To be presented with this award for doing something that I’ve loved for so long, and been very lucky to be involved in, is very humbling.

“It’s very nice to hear from players and coaches I’ve worked with during my career and what they have to say about me. I’ve been lucky to have worked with so many talented people and seeing some familiar faces when I received the award meant a lot to me.”

Among the other award winners was Wigan’s Scott Burns, who, as a volunteer, set up the Wigan Warriors’ Physical Disability and Learning Disability rugby league teams. Now the disability and inclusion officer and head coach for both teams, Burns took home the Changing Lives Award.

Thanks to his inclusive philosophy, relationship-building skills, regular team-building trips and the opportunity to play in stadiums all over the country, his players’ confidence and self-esteem has soared.