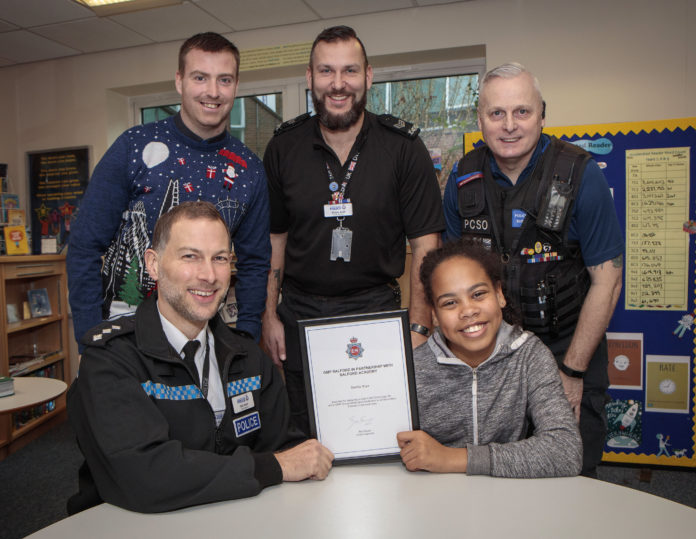 Officers from GMP’s Salford District have been working with Salford City Academy to design a new knife crime logo.

Sergeant Simon Judd, who is based at Eccles, reached out to the school and asked the children to get involved with the competition to design the new logo to be used in the community.

The logo will be used across Eccles, Irlam and Cadishead, and will also be turned into badges and phone grip holders in the New Year, which will be handed out to secondary schools across Eccles.

Children from across the school took part in the competition producing some fantastic designs which gave officers a difficult decision when it came to picking a winner. However, after much deliberation officers chose year-8 pupil, Dorota Itoya who had designed a strong, bold badge with an impactful message.

On Friday 20 December, Sergeant Judd, Chief Inspector Ben Ewart and PCSO Ian Moss attended an awards ceremony at the school to present Dorota with a certificate and a £20 amazon voucher.

Chief Inspector Ben Ewart said: “We are always looking for ways we can engage with the local community, and we thought this was a great way not only to get children involved, but to create an educational opportunity on an issue so prominent in the media.

“It was great to meet Dorota and we are grateful for the design she has come up with which we hope will resonate with others across the community.

“We wanted to create something that would provide a strong message with the target audience we are trying to reach and thought what better way to ask the children to create a design for children.“