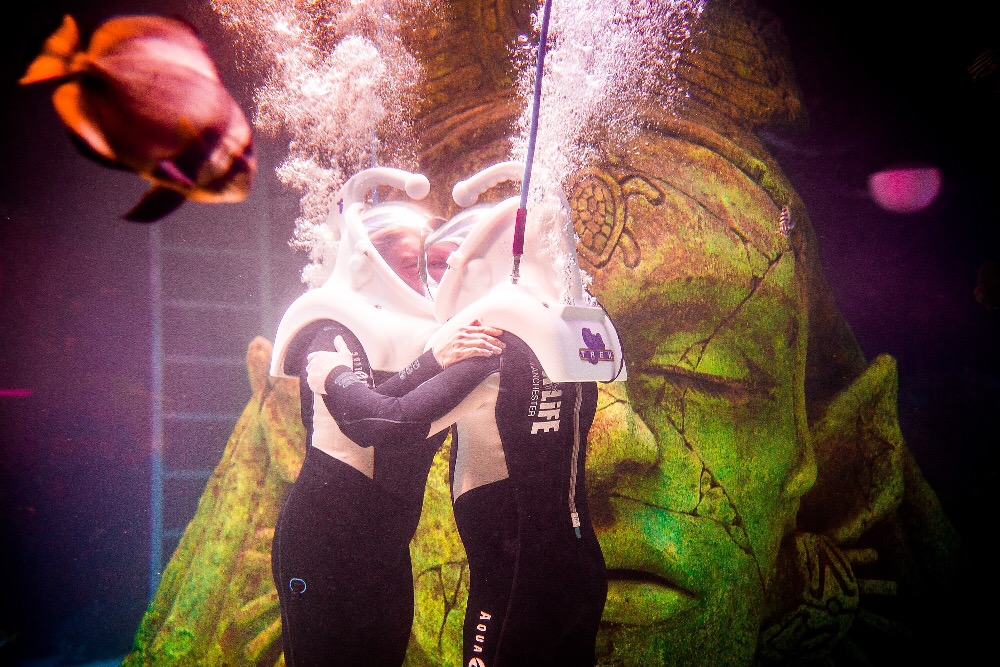 Rachel Ottery took the plunge and faced her fears of sharks- literally by jumping three metres into the SEATREK tank at SEA LIFE Manchester, all in the name of love!
In a bid to convince her partner, Sean Driscoll (47), with a marriage phobia to say yes to her proposal, Rachel decided it was time for her to face her own fears to prove how much he means to her.

The tank where Rachel (45) proposed was full of sharks, including Blacktip sharks and Brown Banded Bamboo sharks and they and other marine life watched on in anticipation as Rachel awaited Sean’s answer- thankfully he said yes!

Rachel, from Todmorden, comments: “The 29th February came as the perfect opportunity for me to turn the tables and ask for Sean’s hand in marriage.

“We started as great friends and the chemistry was just too hard to ignore. So we married in 1993 but due to different circumstances, we decided to part in 2001 and stay very close friends. Two years later, we knew we were just meant to be together and our relationship was back on track and I knew I had to take advantage of this leap year and ask him to marry me.

“I was nervous about asking Sean as I have previously mentioned marriage to him but he’s often dismissed it, saying that he’s tried it once before- I think I may have scared him out of the idea! But I want to be with this man for all eternity. Sean holds the key to my heart and soul. He means everything to me. People wouldn’t say we had the perfect relationship but then who has?”

Rachel continues: “I am petriefed of sharks, to the point I won’t get in a swimming pool without walking around it several times first to make sure there’s nothing in there.
“But all was worth it in the end, as Sean said yes in front of our three children and two grandchildren! Today I faced my fears and honestly, I couldn’t be happier! This was a pivotal moment for me. Not only did I face my fears of sharks, the man who I know I am destined to be with faced his fear of marriage and I cannot wait for my future with him as his wife.” said Rachel.

The leap year was once not a recognised day by English law and it was therefore acceptable for women to break convention, with ladies proposing to the men rather than the other way around.