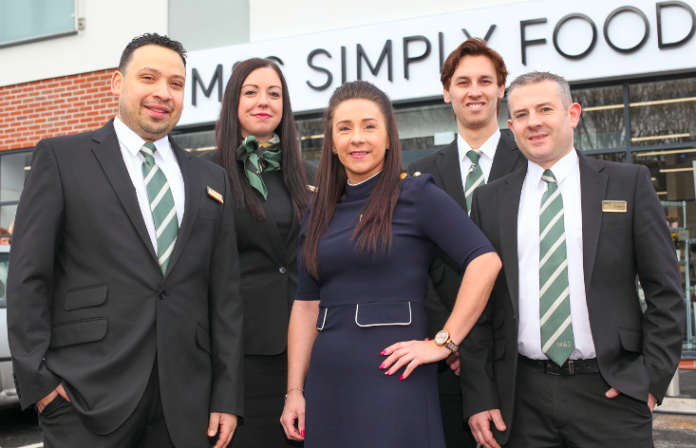 Becki Gorman has been working in retail since she was 14 and started her career at M&S in the lingerie department as an adviser. She worked at that branch of M&S for eight years – next as section manager in homeware and later across ladieswear, menswear, customer services and the cafe – before joining the food hall in Chorlton in 2017.
She said “It was scary and a big step up, but it was a success, and within six months I was appointed to store manager at Hale’s foodhall.
Then four months later, at 34 she discovered she had a brain tumour. As a mother of three children aged 19, 16, 13, and a baby grandchild Becki explains that it was a very worrying time “I had a successful operation in June 2018 and went to back work after 9 months because I loved my job and hated not being busy. At first, I was scared I wouldn’t be able to focus (I originally lost 80% of my outer vision). I was also exhausted, but having supportive colleagues made my return possible.”
She credits the NHS with saving her life. And said she wanted to give back to them, and she owed them so much. She says
“After going back to work at M&S I signed up as an NHS volunteer responder alongside my job. I carry out prescription drop-offs and check-in calls with vulnerable people who are self-isolating then I go home after volunteering work to look after her two children and make tea. I then put myself on duty via an app on my phone. I also do volunteer on my days off. Within the first three weeks of doing this for the NHS, I had done 14 hours of volunteer work.”
Of maintaining morale amongst her hardworking team during the COVIN pandemic she says:
“Working in a food hall during the pandemic has been overwhelming. We had so much different information coming through and I had to find a way to quickly delivery those key messages to staff. It felt a little like Christmas, because of the high volumes that came into the store, but I love working under pressure and so I was in my element. Essentials flew off the shelves until there was no stock left over in the warehouse. We also had to adapt quickly: for example, staff now wipe the baskets and trollies before they are used.”
It is for this dedication to her colleagues, and her wider community and those less fortunate, that she has been nominated by M&S for this award.

Manchester based Reform Radio receiving £33,232 from People’s Health Trust for their ‘The...