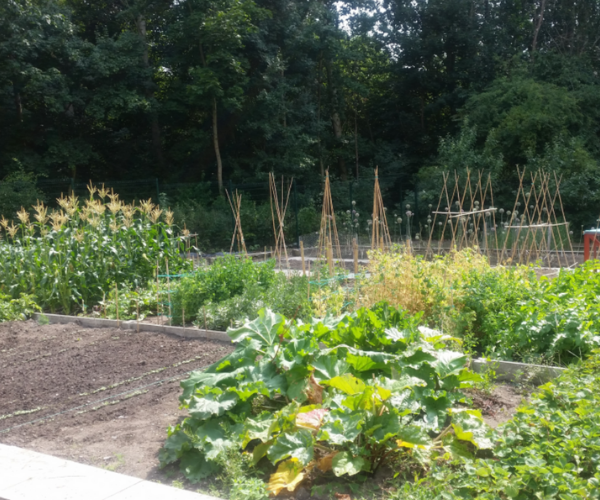 A citizen science project by the University of Sussex has found that urban growers in Brighton and Hove were able to harvest 1kg of insect-pollinated fruit and vegetables per one metre square, which is within the range of conventional farming.

The yields the urban farmers were able to harvest averaged 70kg over a season and were achieved with limited pesticide use, indicating benefits to biodiversity through habitat creation and low environmental damage compared to conventional farming practices.

The researchers calculated that an average of £380 worth of produce per grower was thanks to insect pollination, with berries being the most attractive crop to pollinators. Over the two-year period, the volunteers recorded over 2000 pollinating insects visiting their crops. Bees were the most common group of pollinating visitors accounting for 43% of all flower visits. Surprisingly, flies were also important visitors, accounting for 34% of insect visits.

Beth Nicholls said: “In a world of increasing urbanisation in both the developing and developed worlds, producing food in and around cities has the potential to improve both nutritional and health outcomes, alleviate poverty and simultaneously provide habitat for wildlife and create sustainable cities.”

Interestingly, the urban growers also used fewer pesticides in comparison to conventional farming. The most common urban crop pests were slugs, snails and aphids, with soft fruit and beans being the worst affected. Pesticides were only used in less than 10% of pest cases, benefitting both the insects and the wildlife that feeds on them.

The findings show that urban growing not only offers local produce with limited pesticide use but also creates biodiversity havens in cities: a win-win for the environment. Urban farming also offers human health benefits, with the volunteers reporting feelings of relaxation and satisfaction through tending to their crops.

Urban farming may help with local food security, but it is not necessarily scalable, due to being so labour intensive. However, it is sustainable, productive and less damaging than traditional agriculture.  Some researchers estimate urban produce could actually provide up to 20% of the world’s food.

Beth further highlighted the potential of UK urban farming: “The UK imports approximately £8 billion of fruit and vegetables each year, but our results show that green spaces in cities, such as allotments and community gardens, could play an important role in meeting that demand at a local scale.”

Urban farming has historically received little research compared to conventional farming. Knowledge gaps remain regarding urban crop productivity, pollinator dependency and pesticide use. This has potential implications for human and environmental health, but urban pesticide use is largely unmonitored and unregulated.

The work uses data from 30 citizen scientists in a two-year study. Participants contributed data from their allotments, gardens and balconies, including information on visiting insects (for example bumblebees, honeybees and butterflies), pesticide use and harvest weight. This provided the researchers with a wealth of information, however, as with all citizen science projects, retention of volunteers was low, with 160 originally registering.

The methods used in this study still provide a valuable insight into urban farming and can easily be adapted for other countries. A similar study is currently being implemented in Calcutta, India. Beth explained: “We are currently collaborating with researchers from the Centre for Pollination Studies at the University of Calcutta, who are exploring the viability of urban food production in India, a developing country where urban food production happens on a larger scale and food is produced both for personal consumption and for sale at markets.”