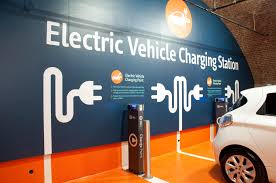 The five V2G chargers, installed at Trafford and Withington Hospitals, are the latest electric vehicle charging technology, allowing energy stored in electric vehicles to be fed back into the national electricity network to help supply energy at times of peak demand.

The electric vehicles will be charged late at night when demand on the grid is at its lowest. The chargers will be used by the hospital’s Transport team to deliver vital services including the transportation of specimens, medication and medical equipment.

“It’s fantastic to see the GM Local Energy Market progressing, a project that will be a key element in realising our carbon-neutral ambitions by 2038,” said Councillor Neil Emmott, GMCA Green City Portfolio lead.

“Vehicle to grid charging is a perfect example of thinking outside the box to ensure we transform how energy is used, stored and distributed in the city-region. We see projects like GM LEM as vital for reducing our carbon emissions and building a new green economy for our towns and cities. I’d like to thank Manchester University NHS Foundation Trust (MFT) for coming on board.

“This project sits alongside Greater Manchester’s expansion of the electric vehicle charging network, the proposed introduction of a city-region-wide Clean Air Zone at the end of May next year, and plans for hundreds of miles of cycling and walking routes as part of our strategy to build a cleaner and more sustainable transport system.”

Hitachi Europe, who are part of the GM LEM, funded the V2G chargers and will analyse the data provided to understand how V2G technology can be used across the UK.

John Whybrow, Hitachi Energy Business Incubation Lead said: “Greater Manchester is showing the way forward with low carbon energy and transport. The data we gather with this project will be used to show how V2G technologies can play their part in balancing the grid as we use more renewable energy across the UK.”

The two-year project is funded by a £6m grant from the Industrial Strategy Challenge fund, delivered by UK Research and Innovation, and is due to conclude in June 2022.

The vehicle to grid chargers is just one component of the wider GM LEM scheme which sets out ambitious plans to revolutionise the use and distribution of energy across the city- region, supporting a low carbon future with the goal of becoming carbon neutral by 2038. The project will also produce 10 Local Area Plans, one for each GM District, which plot the future supply and demand of energy.