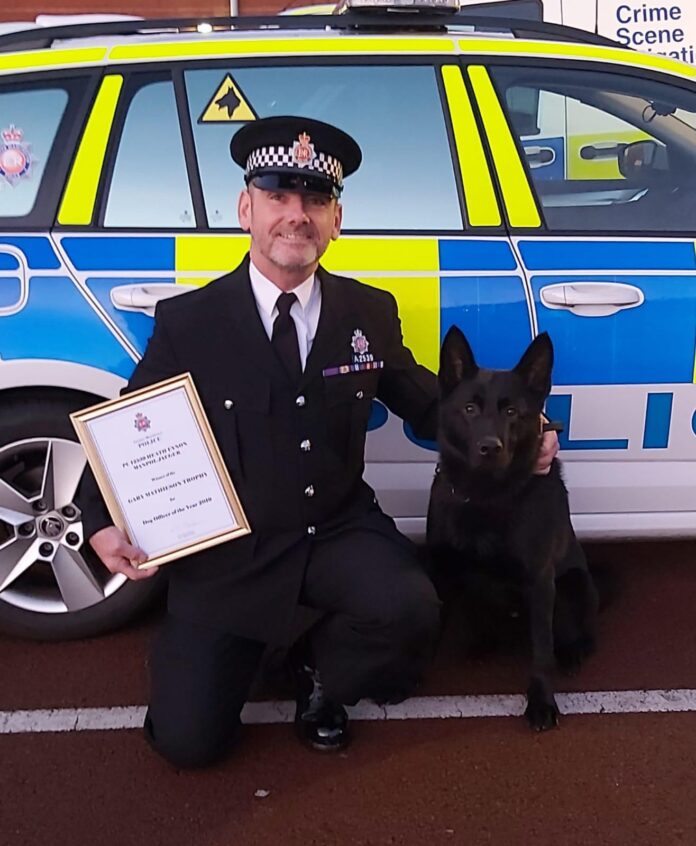 This month PC Heath Eynon was awarded the Gary Mathieson Dog Handler of the Year Award.

The Award, named after GMP dog handler Gary Mathieson who sadly passed away in 2005 due to cancer, is given each year to recognise the officers from GMP’s Tactical Dog Unit, who has delivered an outstanding performance throughout the past 12 months.

The annual award ceremony was scaled back due to the pandemic restrictions, however PC Eynon and his dog Jaeger were presented with the trophy by Assistant Chief Constable Nick Bailey.

PC Eynon begin his career at Greater Manchester Police in December 1998, joining the Tactical Dog Unit in 2007. He has been handler to three German Shepherd police dogs – Max, Tyson and his current dog Jaeger.

In addition to his core role as a general purpose dog handler, PC Eynon is also a firearms support dog handler supporting GMP’s firearms teams on live operations. He and PD Jaeger most recently worked with the team to safely apprehend two suspects thought to have been seen carrying dangerous weapons in the Wythenshawe area, playing an instrument role in keeping the members of the public and other officers safe.

Inspector Glen Rees of GMP’s Tactical Unit, said: “PC Eynon is an outstanding handler who has served the Specialist Operations Branch with distinction for a number of years. His work ethic and professionalism is second to none.

“Despite PC Eynon having less than 12 months until retirement, he remains an inspiration for other handlers, always on hand to give advice but also looking for opportunities to learn and develop himself. Together with PD Jaeger they form a formidable team, responsible for the apprehension of over 45 suspects in the last 12 months alone!

“PC Eynon’s continued enthusiasm, professionalism and work rate is unrivalled and an example to everyone.”

PC Heath Eynon on winning the award, said: “I am honoured and humbled to receive the Gary Mathieson award.

“The award has special meaning because it is in honour of PC Gary Mathieson. It is also a great achievement as I was voted winner by my fellow officers.

“I have recently taken on my colleague’s former dog, a Springer Spaniel called Millie. I hope to utilise her training as a drugs, firearms and cash search dog alongside my current dog, PD Jaeger. “