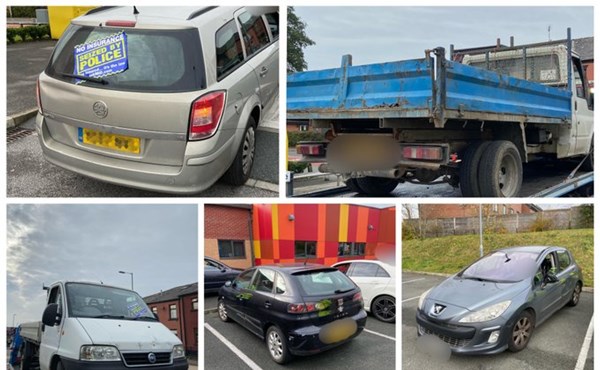 130 people are killed each year by uninsured drivers on Britain’s roads. Officers were out at multiple checkpoints across the force, targeting those who drive illegally and taking their vehicles off the road in order to make the roads of Greater Manchester safer.

Inspector Joseph Barron of GMP’s Safer Transport Coordination Unit, said: “Taking people off the road who have no regard for the safety of others or the legal requirements needed to drive a vehicle is essential to ensuring that we can reduce the number of people killed or seriously injured on the roads of Greater Manchester, a goal which all my officers are committed to achieving.

“The positive results from last month’s operation, which also included nine arrests and 33 cars being prohibited due to not being road worthy, sends the message that it is a crime that will not go unnoticed and that offenders will have to face the consequences – be that a fine, penalty points on their license, having their vehicle seized or being disqualified from driving.

“Action against uninsured driving continues, and I would ask members of the public to assist us by reporting cars they suspect are being driven without insurance via our website – www.gmp.police.uk.”

The Covid-19 pandemic has widened the gap between the rich and the poor, and...

‘We should just get on with leaving’ argues Salford expert as he publishes book...

#MakeMCR – the crowdfunding plan to make Manchester a greater city