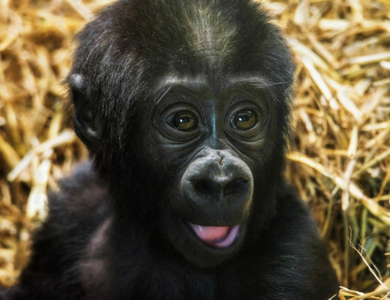 Makari, who is a baby Western Lowland gorilla, can now be seen sitting up and moving around under the watchful eye of his mum Miliki and his big brother Moanda is keen to get to know his sibling!

The adorable new addition, whose species is endangered, was born on September 5th 2017 and he is the third baby for father Bukavu.

He is Miliki’s second baby and Njema, the zoo’s other resident female, is mother to Moanda who was five years old in November.

His older sister Meisie, who was the first Western Lowland Gorilla to be born at Blackpool Zoo, is now seven years old and has been keeping her distance from her youngest brother….but has been seen giving him the odd sniff!

Acting Section Head of Primates, Simon Childs, said: “When Makari arrived in September we were all over the moon!

“As it is Miliki’s second baby we already knew she would be a great mother and she has certainly stayed true to form.

“She is also spending much more time with Bukavu since the birth, meaning the little one has lots of bonding time with dad.

“We have recently seen him wobbling cautiously over to his father to play with the hair on his arms, which Bukavu doesn’t seem to mind..

“It’s so wonderful to see the family all together, they are such a content group, which is testament to the great job all the keepers here do.”

Blackpool Zoo is home to six Western lowland gorillas. Bukavu the silverback is 20 and Miliki, aged 22 is the mother of Meisie, who is seven and Makari. Njema, who is 24, is
Miliki’s half-sister and Moanda’s mum.

Their endangered status is a result of habitat destruction and poaching for the bushmeat trade.