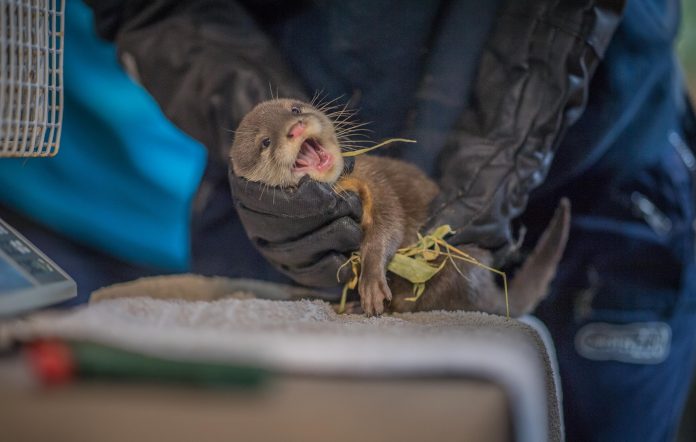 The quintet of tiny pups were said to be in ‘tip-top condition’ after being checked over by the zoo’s keepers and vets who determined their sexes (four girls and a boy), weighed them, listened to their heart beats and gave them a physical examination.

The Asian short-clawed otters – the world’s smallest species of otter – were born 10 weeks ago to mum Annie (3) and dad Wallace (5).

“Each of the five pups showed themselves to be feisty little characters! We’re thrilled though that every one of them is in tip-top condition and they’re all doing ever so well.

“We can’t wait to see them start to take to the water as they continue to grow, become more and more confident and gain independence from mum and dad.”

Asian short-clawed otters are listed by conservationists as vulnerable to extinction and face increasing threats to their survival in the wild. Many areas of wetland where they are found are being taken over by human populations and some are also hunted for their skins and organs which are used in traditional Chinese medicines.

In the UK, the zoo has helped fund research and conservation projects in Cheshire which are monitoring and safeguarding threatened native otter populations – distant relatives of the Asian short-clawed species.

Roll of the dice when it comes to food hygiene