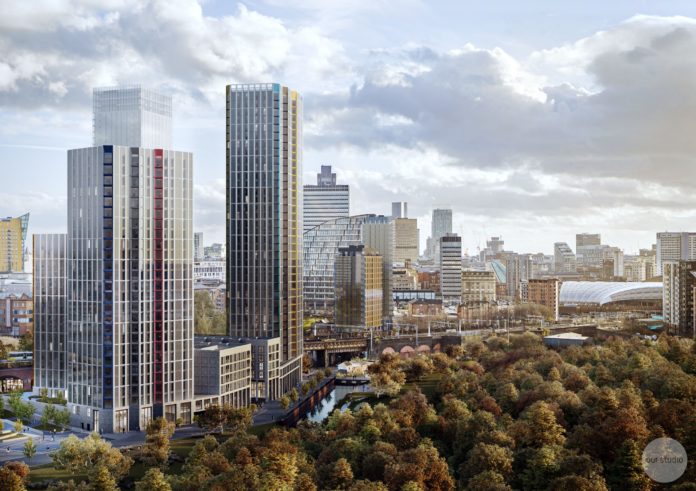 Developers FEC are consulting on proposals for 634 new homes which form the first step in the regeneration of the Red Bank neighbourhood and a key part of the wider Northern Gateway programme.

The draft proposals being put forward for public consultation aim to create a new community with 634 high quality homes at Victoria Riverside in the Red Bank neighbourhood of the Northern Gateway. Victoria Riverside will comprise a mix of tenures including shared ownership.

The scheme comprises a family of three towers with the landmark 37 storey building marking the corner of Gould Street and Dantzic Street, the gateway to the Red Bank neighbourhood. Two sister buildings of 18 and 26 storeys complete the development.

Designed by architects Hawkins\Brown with landscape architect Planit IE, the development will also feature commercial uses along Dantzic Street and high quality public realm to create Gateway Square which will become the entrance threshold into the Northern Gateway, along with new routes to and from Manchester city centre.

FEC project director Hilary Brett said: “Sharing our draft proposals for Victoria Riverside is an important day for us. It is a key gateway site and sets the tone for regeneration within Red Bank as part of the Northern Gateway programme with Manchester City Council. We hope the site will play a key role in beginning the transformation of the wider Lower Irk Valley into a thriving collection of successful neighbourhoods. We welcome views from neighbours and residents on our draft proposals.”

Katie Tonkinson, Hawkins\Brown partner and head of Studio North, commented: “Our approach to the site has been to embed quality in our design, from district to doorknob. The opening up of key routes along Bromley Street and Dantzic Street provide a significant public realm contribution, extending the urban life of the City.

“The placement and sculpting of the three towers allows the site to integrate with the wider district creating visual permeability and key connections both back to the urban landscape and to the natural features of St Catherine’s Wood and the River Irk. The generous picture windows celebrate these connections at human scale and highlight the form and fluting of the building close up and at city scale, with a unique colour palette for each building offering distinct identity.”

Victoria Riverside forms part of the first phase of the £1 billion Northern Gateway being delivered in partnership with Manchester City Council. The first phase comprises more than 1,000 new homes which also includes development within Collyhurst and at New Cross Central. FEC are committed to delivering shared ownership at Victoria Riverside and will be providing 20 per cent affordable housing in a mix of tenures across the first phase.

£51.6 million worth of Government Housing Infrastructure Investment to Northern Gateway was announced in last Wednesday’s budget, which will be a catalyst in the regeneration of Red Bank and unlock over 5,000 new homes.