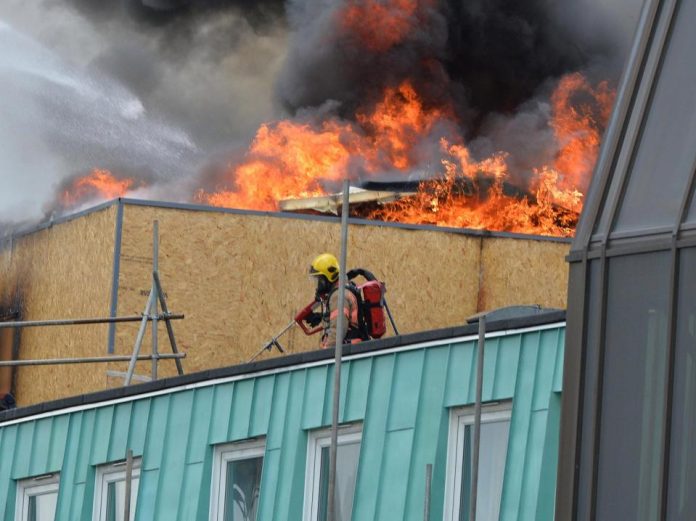 Greater Manchester’s Fire and Rescue Service (GMFRS) has found that a blaze on the site of The Christie hospital last year was caused by welding works taking place on the roof.

Dozens of fire engines from across Greater Manchester tackled a large fire at the hospital’s Paterson building on Wilmslow Road on April 26 last year.

The building is leased to the University of Manchester and is the headquarters of the Cancer Research UK Manchester Institute where globally renowned research takes place.

Following a lengthy and complex fire investigation process, GMFRS has now concluded that the fire was caused by hot embers and used rods from welding works that fell through a gap in the roof onto combustible materials in a plant room below.

GMFRS’ Assistant County Fire Officer and Director of Prevention and Protection Geoff Harris said: “Following an extensive forensic investigation, interviews, and reconstructions carried out between all the parties involved in this incident, GMFRS has concluded that the fire at The Paterson building in April 2017 was caused by used hot welding rods, embers and splatter that were being produced by welding work taking place on the roof. These rods and embers fell onto combustible materials through a gap in the roof that had been cut to enable a metal frame to be tacked in place. The hot items fell down the side of the wall where it was unobserved by the workers’ fire watch procedure and landed on cardboard and fabric items.

“During the investigation, several hypotheses were investigated and ruled out, including light reflection, carelessly discarded smoking materials and arson.

“The fire wasn’t discovered for around half an hour and air flow into the area meant the fire was able to quickly develop into a very serious incident. But fire crews worked extremely hard to minimise the damage caused and salvage the important research work in the building using various equipment, including aerial appliances to put water on the fire from above, and ultra-high pressure lances to pierce through the building walls to reach the fire inside.

“Thankfully, due to the dedication and professionalism of the fire crews involved, nobody was injured, patients within the hospital were not in danger and the vast majority of the cancer research taking place within the building was salvaged.”

The investigation found that on the morning of the fire, smoke was first seen at 10.25am as the roofers who had been conducting the welding works returned from a half hour break. At 10.35am the first of 17 emergency calls to North West Fire Control was received, reporting smoke coming from the roof of the building.

The affected building was safely evacuated and other office buildings nearby were also evacuated as a precaution but no buildings containing patients were evacuated.

ACFO Harris added: “The Christie fire was declared a major incident due to the number of resources used – fire appliances were at the incident for three days and conditions were difficult for our crews. Thankfully nobody was injured but the cost of the damage was significant.

“The fire investigation has been a lengthy and complex process and I’d like to thank all those involved. We will now continue work on a separate fire safety investigation in relation to the incident, which is looking at the fire safety procedures in place before and after the fire.”

Barmcake or Muffin? Mancunians can chart their own accents and dialects