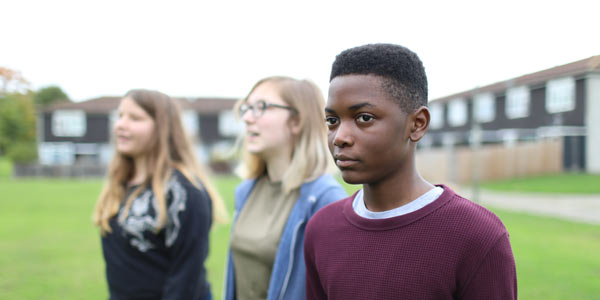 Fear of crime is damaging the well-being of 2.2 million teenagers in the UK, with one in three teenage girls fearful of being followed by a stranger and one in four boys worried they’ll be assaulted.

That’s according to new research from The Children’s Society who reveal in the charity’s 2017 Good Childhood Report that more than 1 million older children are contending with at least seven serious problems in their lives, significantly harming their happiness.

Fear of crime has emerged as the most widespread of the issues for children aged 10-17, with almost 2 in 5 worried about falling victim to two or more crimes.

One teenage girl interviewed by the charity said: ‘[They’re] blowing kisses, men beeping, standing asking [your] age, whistling, shouting, stopping vans next to you, asking for [your] number’.

A 13 year old boy said: ‘You’ve got to fight to like kind of survive around this area. You have to stick up for yourself the whole time.

Closely following this fear were the worries of 2.1 million teenagers whose parents are struggling to pay the bills.

The Society’s survey of 3,000 10-17 year olds revealed that more than half (53%) have experienced at least three hardships in the last five years, making them markedly unhappier.

The findings support The Children’s Society’s determination to focus more closely on helping children who are facing what it calls ‘multiple disadvantage’. Other disadvantages identified in the report include having a parent with a serious illness, suffering neglect and being at risk of homelessness.

‘It is alarming to see that millions of teenagers are contending with a multitude of problems in their lives and suffering as a result.

‘Teenagers are coming under pressure in all areas of their lives, whether it’s being afraid to walk down their street, worrying about money, or having a parent who’s seriously unwell and this is damaging their well-being. Sadly we know many of these teenagers will only get help if they reach crisis point – such as running away from home, or abusing alcohol or drugs. With a £2 billion funding gap for children’s services looming, children are increasingly finding themselves with nowhere to turn, putting them at greater risk.’

The Children’s Society is calling for the government to urgently address the funding shortfall in children’s services – predicted to reach £2bn by 2020 – and for local government, police forces, schools and other local agencies to work together to improve the well-being of children in their area.