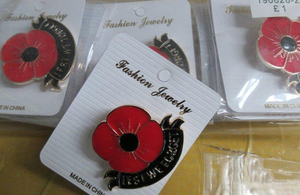 The goods, some of which were also branded with the words ‘Lest we Forget’, were later confirmed to have infringed the Royal British Legion’s ‘two-petal poppy’ copyright.

The items were seized on 8 November when Border Force officers from the mobile International Trade Team based at Tilbury Docks attended a freight depot to examine an air freight consignment from China.

Inspecting the shipment, which was destined for an address in the Manchester area, officers discovered packages containing poppy branded goods including 1,212 scarves, 5,400 badges and 1,200 key rings. Suspecting the copyright infringement, officers seized the goods and contacted the rights holder.

Amongst the consignment, officers also discovered 600 four petal brooches which were later confirmed to infringe the ‘four-petal’ copyright held by the Earl Haig Fund Scotland (Poppyscotland).

Had these fake goods entered the market, they could have cheated thousands of pounds from unsuspecting members of the public and diverted vital funds away from the Royal British Legion.