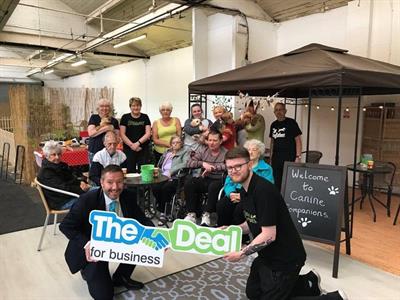 A Wigan man has packed in his nine-to-five job to set up his own doggy day care centre and to tackle social isolation.

Tom Curwen, 23 from Winstanley, was previously training as an electrician until around ten weeks ago when he set up Canine Companions with his mum, Alison Knowles.

Canine Companions recently signed up to Wigan Council’s Deal for Business and offers a bespoke day care service for dogs while their owners are at work or away for the day.

In addition to the day care service, Canine Companions allows local people to come and spend time with the animals to help with social isolation, dementia and other pressures people might face.

Speaking about his new venture, business owner Tom said: “The whole business is based around a customised service for the dogs we look after and helping local people be a part of positive experiences.

“We look after a number of dogs with different personalities, some with various levels of training and some who aren’t used to being around other dogs. We’re committed to speaking with the dog owners to establish the needs of the dog and offer a service with those needs at heart.

“I understand the importance of knowing your dog is being looked after properly and it’s partly the reason I wanted to set up the business as I had my own dogs that I didn’t like leaving at home.

“All owners are aware that another strong part of our service is to encourage interaction from members of the public in a controlled way. Vulnerable people or residents who may be living in isolation or facing stress or anxiety can feel calmer and more positive after being around the animals because there’s no pressure.”

Canine Companions recently worked with Central Day Centre so their service users living with dementia could come to the base on Eckersley Mill to spend time with the dogs.

Tom added: “It was great and allowed those with dementia to make connections with their past as some had previously owned dogs before. It was clear that the dogs were enjoying themselves too. We are looking forward to making this a regular meet up.”

The Deal for Business was set up by Wigan Council to contribute to the sustainability of a thriving local economy.