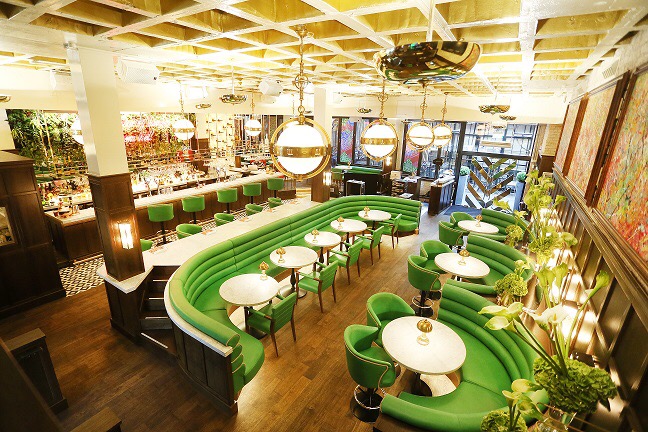 Local school kids will gather at a popular Manchester city centre hangout to debate whether parents should have access to their social media accounts.
Debate Mate, a global educational charity, is behind the event that will take place in front of high-profile business leaders at Neighbourhood Bar and Restaurant in Spinningfields. The aim of the breakfast event is to raise the profile of the charity and gain support.

Two teams of six primary school children, from Plymouth Grove in Chorlton and St Elizabeth’s in Wythenshawe will feature as part of the breakfast debate, the latest in a series of similar events.

For the past 12 months, Debate Mate has hosted breakfasts at the world-famous The Wolseley in Knightsbridge, as part of their high-net-worth Platinum 100 Club, and this will be the first in Manchester and the first outside of London.

Funds raised from the Club are critical to the work of Debate Mate across the UK.

There are already 19 primary and 21 secondary schools within the programme, but awareness and support for the charity has been historically the strongest in London and the South East.

Margaret McCabe, Debate Mate Founder and Chief Executive Officer, said the kids have been receiving mentorship from expert debaters as part of the programme, which is proven to develop communication, teamwork, leadership and critical-thinking skills, while improving confidence and resilience.

The former barrister and Human Rights Watch advisor also paid tribute to Lisa Morton, Managing Director of PR and marketing consultancy, Roland Dransfield, who was instrumental in helping to extend support for the Debate Mate Programme in Manchester.

“We’re incredibly excited about helping to grow Debate Mate’s supporter base in Manchester,” said Margaret. “The city was always the next place we wanted to roll out the concept in.

“It’s such a diverse area and fits the criteria for Debate Mate. While it’s an exciting city with lots of talented students and people with entrepreneurial spirit, there are also areas of child deprivation.”

Margaret, who has also worked in the voluntary sector including Centre Point, NSPCC Justice for Children programme, for more than 20 years, said: “The debate at Neighbourhood will focus on whether parents should have access to their children’s social media accounts.

“It’s very topical as it relates to issues like cyber-bullying, grooming on the internet as well as young people being recruited by ISIS on social media.”

She added: “What’s amazing about these events is seeing with your own eyes how confident, self-assured and resilient the kids are during the debates. We’ve held many similar events in London and adults in the audience have simply been left in awe of the kids and often say, ‘I couldn’t get up there and do that’.”

“You get people who are 30 years into their careers still saying how terrified they are of public speaking, yet we are getting 6,000 kids a week going through the programme who are able to stand up and not be phased at all.”

Around 30 people are down to attend the private event at Neighbourhood on Tuesday, September 20.

It comes after Debate Mate was recently the focus of an 8-part primetime TV show on Sky 1 – The Kings and Queens of Speech.

Lisa Morton, Managing Director of Public Relations and Marketing Consultancy Roland Dransfield, has worked with the Debate Mate team to help raise awareness of the charity within the region.

“I overheard the Debate Mate team talking about the concept in a restaurant in London and got goose bumps. I introduced myself and asked them to tell me all about it. We continued to talk about the possibility of bringing it to Manchester and that’s happened which is brilliant.

“I went to see the national senior school final in London and saw two teams of eight-year-old children in a show debate and was completely inspired. It’s a fantastic concept and one that is of such great benefit to so many children.”

Margaret, who was a key part of former Prime Minister Tony Blair’s 2005 election campaign team, said: “Lisa has been fabulous and has really bought into the idea. It’s amazing when people fall in love with the concept before they’ve even seen it, something we find often happens. We’re very lucky to have her involved.”

She added: “The Debate Mate debates are something everyone can relate to; no matter what background people are from. You can get people with all the money in the world who can be crippled by lack of self-confidence.

“This is something we want to keep doing in Manchester as the primary schools that we target directly feed into the secondary schools that we work in which creates sustainability, ensuring the skills kids learn stay with them for the rest of their lives.”

The Manchester launch of Debate Mate takes place at Neighbourhood Bar and Restaurant, Spinningfields from 8am to 9.30am on Tuesday, September 20.

Armed Forces to travel for free on Metrolink