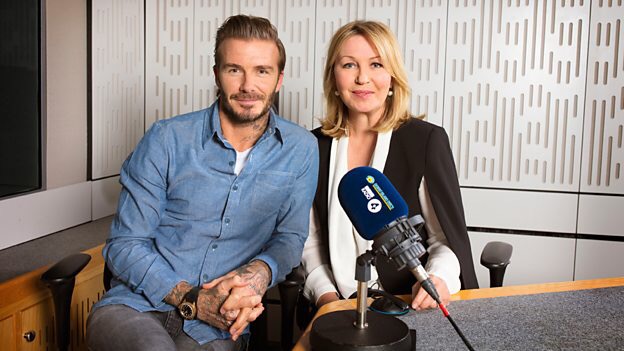 The On-air celebrations will begin on 28 January with a special three hour programme on BBC Radio 4 Extra featuring some of the wonderful voices from the archive and extracts from recently rediscovered episodes, which will also be restored to the show’s online archive.

Sunday’s episode of Desert Island Discs will also pay homage to the occasion by re-introducing the sound of sea wash to the opening and closing of the programme for the first time since the 1960s.

David Beckham says: “I’m delighted to join Desert Island Discs for its 75th anniversary celebrations. Music has been a huge part of my – and my family’s – life and it is a real pleasure to highlight that on such an iconic programme.”

Kirsty Young, presenter of Desert Island Discs, says: “Seventy five is a birthday worth celebrating and having David Beckham as my Castaway seems like the perfect gift. His sporting legacy is of course extraordinary. And along with his charisma, cultural impact and humanitarian work, he is a modern man of many parts. He’ll be a fascinating guest to welcome on to my little interview island!”

Since it was first heard on 29th January 1942, the programme has invited over 3,000 guests to talk about their lives and choose eight tracks, a book and a luxury item that they would take with them to a desert island.

The celebrated format was devised by Roy Plomley, who hosted the show until 1985, after which it was presented by Michael Parkinson until 1988 and Sue Lawley until 2006. Today, in the hands of current presenter Kirsty Young, the show continues its reign as one of BBC Radio’s most loved programmes with a weekly on air audience of 2.8 million. Desert Island Discs is also available as a podcast with iTunes and an extensive archive is available online, with episodes dating back to the 1950s available to listen and download.