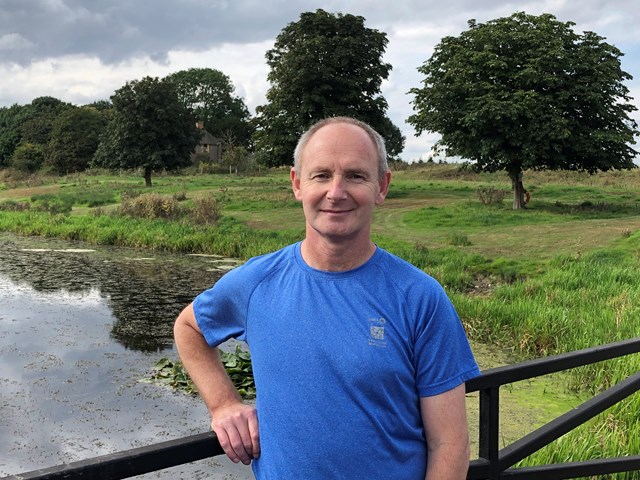 A cyclist who was left in a critical condition and unconscious by the side of the road after strong winds knocked him off his bike, has overcome his injuries to take on Great Manchester Run for NorthCare Charity.

Andy Edmonds sustained multiple head, spinal, shoulder, and chest injuries and broke several bones when the freak accident happened during a lone cycle ride in August last year. The father-of-three was heading from his home in Ingham, Lincolnshire, to the Peak District when strong winds blew him off his bike and into the side of the road between Snake Pass and Glossop.

Keen cyclist Andy, 55, doesn’t remember anything from that day, but police and ambulance reports say he was found unconscious by a passing motorist who called the emergency services straight away.

Andy’s injuries were so severe, including bleeding on the brain, that he was taken to the Major Trauma Centre for Greater Manchester, based at Salford Royal and run by Salford Care Organisation. He later ended up on the Critical Care Unit to be treated for chest and lung injuries, before having a lung operation at Wythenshawe Hospital.

Once Andy was discharged in September 2020, he continued to attend fracture and spinal clinics and receive physiotherapy from staff across Salford Care Organisation, which is part of the Northern Care Alliance NHS Group (NCA).

Now, a year later, Andy has spoken about his ordeal for the first time as he prepares to take part in Great Manchester Run’s half marathon on Sunday (26 September) to raise money for NorthCare Charity. The NHS charity supports Salford Care Organisation by funding innovative equipment, education, research and wellbeing activities.

Andy, project manager at Roke, a UK leading innovator in science and engineering said: “I have no recollection of the event itself and my memory of the following few days are limited but it turned out to be a very windy day, which is how I came off my bike and sustained all these injuries. I’ve done that route a few times before and didn’t think anything of it as it was a nice day. I vaguely remember waking up on the trauma ward at Salford Royal and being in need of the care and support of a great many people. It was all a bit of a shock for someone who had had very little interaction with his GP, let alone a hospital.

“I feel I was extremely lucky to have survived and received the care that I have. It’s incredible how the body is able to recover and respond so that you come out the other end. There are a few parts of me that don’t look or work the same, but overall, I’ve made a good recovery and been on quite a journey over the past year.”

Andy’s recovery was made all the more challenging as Salford Royal is around 100 miles from his home and restrictions in place due to the Covid-19 pandemic meant his wife Jacky and family could not visit. However, staff regularly communicated with them and he was able to see them via video calls, which were set up by the hospital as part of his recovery.

Although he still has mobility issues with his shoulder, which took a lot of the impact when he fell, Andy has been training well over the past few months to get fit and will be one of around 50 runners taking part for NorthCare Charity when the iconic running event returns to Manchester city centre on Sunday.

Andy added: “I benefitted enormously from the continuity of care and the support of so many people who have helped me to navigate the ups and downs to where I am today. I felt strongly after the accident that I wanted to do something to give back to those who have cared for me. And when the opportunity came up to get involved with the Great Manchester Run, I knew it was the right time and Roke were delighted to provide a corporate donation to help me raise money for a great cause like NorthCare Charity.

“It’s my first time competing in Great Manchester Run and I’m sure it won’t be easy as I’m not back to the fitness I had before the accident. But if I can do it and get to the end, while raising a good amount of money, I’ll be satisfied.”

NorthCare Charity fundraising officer Becky Swithenbank said: “Andy has been on a remarkable journey and everyone involved with his care is so pleased that he has made such a fantastic recovery. This is down to his strength and determination, as well as the fabulous care he has received from our NHS staff during what has been the most challenging 18 months of their lives.

“We’ve been overwhelmed by the support and love for our NHS staff. Supporters like Andy help us raise vital funds so we can continue to make a difference to people’s lives across Greater Manchester and beyond.”