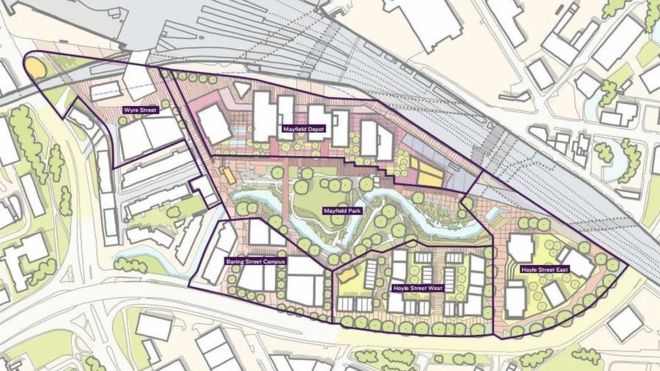 Manchester Council’s executive Committee have agreed plans that will include the new public park in Manchester.

The plans form part of the strategic regeneration around the area of the former Mayfield Railway depot in the City Centre which could also see 1,500 new homes and a 650-bed hotel built.

The scheme itself is part of the wider High Speed 2 (HS2) Manchester Piccadilly development.

The park, included in the redevelopment, would cover 6.5 acres (26,000 sq m) or the size of 10 football pitches,retaining the Mayfield Depot and a number of other existing structures, including the Star and Garter Public House, and enhancing the River Medlock which flows through the area.

“The presence of historic features, such as mature trees, cobbles and footbridges, could be restored to add interest and distinctiveness. It is proposed to step, terrace and sculpt the
park to create a better connection to the Mayfield depot. There is also the opportunity to improve the course and quality of the River Medlock as it flows through the park, and to provide a new waterside/wetland environment.” said the report to councillors

According to the council,The vision for Mayfield is to deliver a world class, transformational, distinctive and imaginative commercially-led, mixed use neighbourhood, anchored by the
new Mayfield Park.

The overall plans for the area could see the creation of up to 10,000 jobs, with a high number expected to be in business and professional services and digital industries, but also
within other sectors such as leisure and tourism.