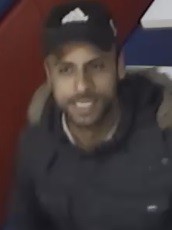 Police have released an image of a man they want to speak to after a woman was sexually assaulted in Longsight’s Crowhurst Park back in August.

The woman, who is in her 30s, was walking past Crowcroft Park in Levenshulme towards the bus stop on Stockport Road at 8pm on 17 August 2018 when she was approached by a man who called himself ‘Ali’.

He pressured her to visit an unknown pizza shop and then Dixy Chicken on Stockport Road, Longsight.The man sexually assaulted her and kissed her against her wishes before she ran away.

Police have released an image of a man they want to speak to in connection with the incident.

Constable Nat Whiles of GMP’s City of Manchester Division said: “The offender in this incident has coerced his victim before sexually assaulting her.

“We have now released an image of a man who we think can help with our enquiries.

“Do you recognise him or have any information on the incident? If so – get in touch with police.”